On Wednesday, March 23, the Eastman School Symphony Orchestra presents a program of music by two great twentieth-century masters, Bela Bartok and Dmitri Shostakovich. The free concert begins at 8 p.m. in Kodak Hall at Eastman Theatre. The program notes for each of the pieces follow. 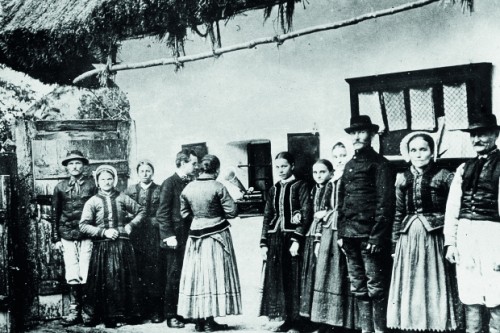 The artistic plurality of the early twentieth century defined a generation not by formal musical similarities, but by the compulsion to create new, highly stylized, and idiosyncratic methods of composition. To quote contemporary poet Ezra Pound, these artists sought to “Make it new.” For Bela Bartók (1881-1945), Eastern European folk music provided the raw material he needed to craft his voice amidst the plethora of musical styles emerging around industrialization, crumbling empires, and global warfare.

Between 1909 and 1914, Bartók conducted ethnomusicological research in Transylvania, recording and transcribing the dances he used in the Rumanian Folk Dances for solo piano in 1915. Because Transylvania was part of the Austro-Hungarian Empire and the Kingdom of Hungary until 1920, the work was originally titled Rumanian Folk Dances of Hungary; “Rumanian” simply referred to the Roma people, not the country of Romania. After orchestrating the piece in 1917, he renamed the work Rumanian Folk Dances due to the delicate political climate near the end of World War I, which led to the dismantling of the Austro-Hungarian Empire and the annexation of Transylvania by Romania. Bartók was also influenced by his notion of a “brotherhood” of Eastern Europeans beyond politically imposed borders, a belief reinforced by his comparative research on the folk music of Eastern Europe.

In this early work, the folk melodies Bartók captured retain their pitches and rhythmic content. This is much different from his later compositions, when the folk idiom was so ingrained in his style that he was able to invent his own melodic and rhythmic content. The counterpoint and harmony Bartók composed to accompany these melodies was influenced by the folk music he recorded, and intensely characteristic of his own highly idiosyncratic and recognizable harmonic language. In this work, as in much of Bartók’s music, the harmonic material combines the Western and Eastern tonal palettes, and he uses dissonance to punctuate energetic and jagged rhythms.

The Rumanian Folk Dances, in their solo piano and orchestral versions, remain one of Bartók’s most popular and accessible works. The directness and immediacy of the folk dances allow the listener to hear very clearly how Bartók’s ethnomusicological interests permeated his later, more complex compositions.

In January 1948, Dmitri Shostakovich, along with Prokofiev, Khatchaturian, and many other Soviet composers, was publicly shamed by Andrey Zhdanov, the Stalinist Minister of Culture, for the supposed “formalist perversions” of his music. This was mumbo-jumbo, but as Shostakovich remembered from the political tribulations caused by his music in the 1930s, it was dangerous mumbo-jumbo. He continued to compose important chamber and symphonic works – and waited for a more propitious time to introduce them. These included his Fourth String Quartet, First Violin Concerto, the song cycle From Jewish Folk Poetry, and Symphony No. 10. All were introduced to great international acclaim, but not until after the death of Stalin in 1953.

To keep his name before the public during these years — and to keep some money in his bank account — Shostakovich wrote popular film scores and agitprop cantatas, and compiled five “Ballet Suites” from recycled bits of previous ballet, film, and other scores, intended for radio performance.

These suites contain some of Shostakovich’s most appealing music – though as always with this composer, there is a layer of irony to be dealt with. Much of this “light” music was taken from old projects that had been banned by Stalin and his musical henchmen. In particular, Shostakovich mined his ballets The Bolt (1931) and The Limpid Stream (1935), lighthearted treatments of two Stalin-era preoccupations: industrial sabotage and collective farming, respectively. He counted (successfully) on his persecutors’ short memories. 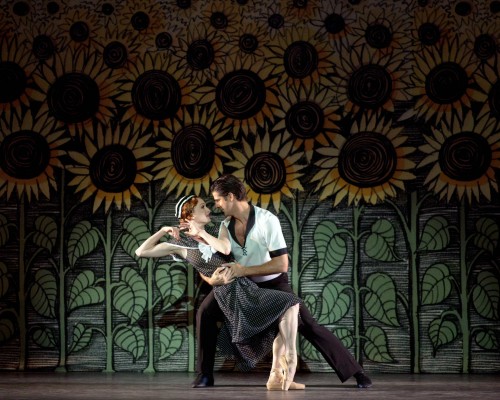 A scene from The Limpid Stream, revived in 2011 as The Bright Stream

The first ballet suite, produced in 1949, consists of six brief movements. The opening Lyric Waltz is taken from Shostakovich’s 1934 Jazz Suite No. 1 (there’s nothing jazzy about it; in fact it has an Eastern European flavor); the remaining five movements are drawn from The Limpid Stream (Dance, Romance, Polka, Galop) and The Bolt (Waltz-Scherzo).

Whatever political ironies Shostakovich had in mind as he cobbled these pieces together, they are musically straightforward, chock-full of catchy tunes, and charmingly orchestrated. The Dance features pizzicato strings, in 19th-century French ballet style; the Romance, led off by a soulful oboe solo, might remind you of the famous Romance from Shostakovich’s film score The Gadfly; the zany Polka features the tiniest of piano solos; the Waltz-Scherzo is in “music box” style. The rowdy Galop, which winds things up, was recycled once more, in Shostakovich’s 1958 operetta Moscow Cheremushky. 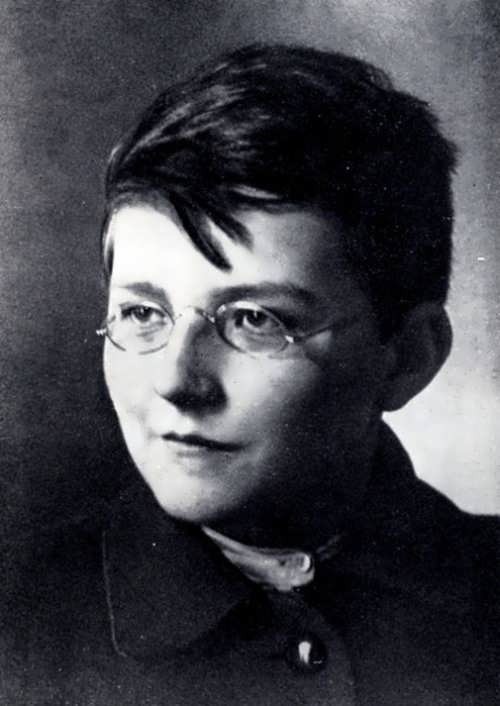 As a trumpet player who has played this piece four times, I know this symphony well. The remarkable thing is that every time I’ve played it, I was older than the person who wrote it, and I’m only 23. Shostakovich completed his First Symphony in December 1925 as his graduation exercise for Maximilian Steinberg’s composition course at the Leningrad Conservatory – when he was 19 years old. When mentioning musical prodigies, many of us musicians have a Pavlovian reflection of discontent and regret. We conjure up images of Mozart sitting down at age eight to write a symphony, or of a prepubescent Mendelssohn whose pieces eclipse our wildest notions of mastery. Shostakovich is another such composer.

The symphony was first performed on May 12, 1926 in Leningrad to tremendous success, and it quickly made its way to America, setting the stage for a career of international renown. In November 1928, Shostakovich’s First had its American premiere with Stokowski and the Philadelphia Orchestra, and later performed with Arturo Toscanini and the New York Philharmonic in April 1931. The program note for the 1928 Chicago Symphony premiere of the piece stated: “The name of Dmitri Shostakovich will vainly be searched for in the dictionaries of musical biography.” Few knew about Shostakovich before this symphony premiered, but its brilliance, its irony, and its acerbic wit set the foundation and an expectation for all the great Shostakovich works to come.

The piece is an excellent representation of Shostakovich’s early influences. The wit, sarcasm, and youthfulness displayed in his first symphony, as well as its feelings of melancholy and terror, recall these earlier experiences. After the Russian Revolution, economic hardship became commonplace. Funding for the arts existed, but barely, and it did not get much better under Lenin’s New Economic policies. The Shostakovich family was not above these struggles; they continued to suffer financially while Dmitri was away at school. To earn money, the young Shostakovich played the piano and improvised music for the newest and most magical medium of the time—silent films.

Also present in the symphony is the young composer’s indelible deference to those who influenced him musically. In these influences he draws comparisons between his youthful insight, the Russian symphonic tradition, and more contemporary musical ideas. When the work was premiered in America by Stokowski, the composer’s aunt, Nadezhda Galli-Shohat, recognized many of its themes and motives as musical excerpts Shostakovich used to play as a boy in Russia. Easily discernable is the influence of Stravinsky’s Petrushka, as well as a horn passage reminiscent of Strauss’s Till Eulenspiegel. Other influences on this work include Mahler (Shostakovich’s symphonic idol), Tchaikovsky, Schoenberg, Berg, and, some argue, Charlie Chaplin, as evidenced by the marionette and machine-like quality of its various movements—an idea in vogue at the time. 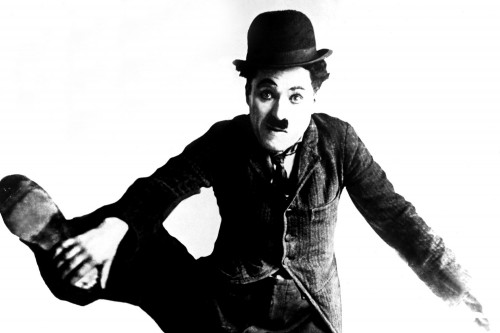 The first movement begins as a piece of chamber music for muted trumpet and bassoon, which leads to an allegro non troppo march reminiscent of the vaudeville music Shostakovich knew so well. This jaunty theme will surprise us again in the third movement. Next comes an ostensibly lyrical waltz theme. The development section, with its off-kilter mock-comic feel, features a return to the days of vaudeville. The first movement ends in the classical tradition, bringing back the opening theme. It is first realized in the flute, then in the clarinet, ending an unconventional development section with a nice bow to traditional sonata form.

The second movement is a waspish scherzo, famous for its abrupt false start in the cellos and basses. For the first time the piano is featured, in rapid scalar runs. Its alternation of refined humor and mockery recall his days playing for the movie houses, where he often laughed so uncontrollably during his favorite scenes that he had to stop playing. The slow middle section, which Edward Downes has noted ”would be marked religioso if it hadn’t been composed in Soviet Russia,” brims with uncertainty and wariness. Finally, the bassoon brings us back to the opening allegro theme; the scherzo ends with widely spaced chords from the piano and violins.

It is interesting to note that after composing the first two movements, Shostakovich wrote to a friend that it would be more fitting to call the work a “‘symphony-grotesque’. I am in a terrible mood,” he continued. “Sometimes I just want to shout. To cry out in terror. Doubts and problems. All this darkness suffocates me. From sheer misery, I’ve started to compose the finale of the symphony. It’s turning out pretty gloomy.” Much like the disposition of the young composer, the grotesque feeling of the first two movements gives way to the caliginous feeling of the final two.

The third movement opens with a dark theme characterized by melodic half steps —a theme not unrelated to the opening one of the first movement—which is played by the oboe and then relayed to the cello. This theme crescendos and climaxes, continuing in a deeply expressive vein that rebukes critics of Shostakovich’s supposedly inferior melodic talent. The lento finally fades away with a distant echo of the opening motif. Without pause or praise, a snare drum roll cuts the music to ribbons and propels us into the frenzied finale.

The finale combines many previously heard themes, as well as introducing new thematic material, in a constant cross-section of furiously contrasting highs and lows of texture, timbre, mood, dynamic, and tempo which climax in a famous timpani solo. After transformation of various thematic materials from earlier movements, the finale closes with trills from the woodwinds and strings and a brilliant, albeit frantic, fanfare in the brass.

Shostakovich’s later symphonies would compel musicologists and music lovers to take into account the world in which his music was written. Much of his development was governed by forces nonmusical in nature, and his music communicated the strife of a people on the brink of ruination—the social and political aftereffects are felt to this day. While Shostakovich’s First Symphony sets some of these features to music, as an early work it is very much the well-earned diploma of a brilliant student rather than a strict commentary on the life outside of his head—an unabashed musical exercise, and quite a graduation present!