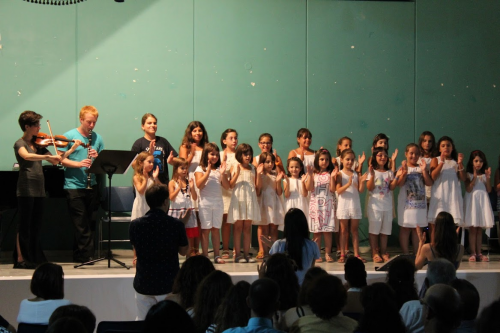 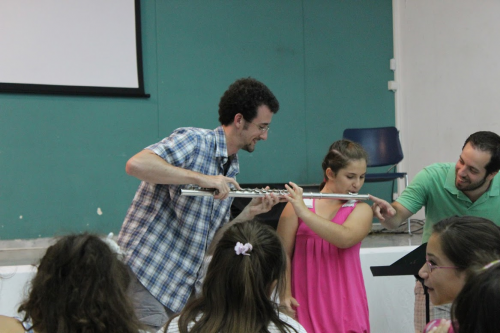 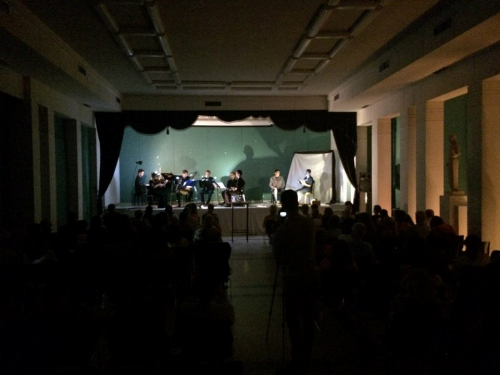 Photographs from the inaugural Ritsos project in Athens, July 2015.

During a visit to her grandmother’s homeland in 2013, composer Aristea Mellos learned that the residents of the Greek island of Samos had few opportunities to hear live classical music. She set out to change that when she got back to Eastman.

With the help of her colleague Theocharis Papatrechas and working with Anastasia Andreadis, founder of the theatre troupe Donoussa on the island of Samos, Mellos, an Eastman doctoral student, planned and launched the Ritsos Project. This festival of art, poetry, and music is named for long-time Samos resident Yiannis Ritsos, one of the great Greek poets of the 20th century, and united Eastman performers and composers with Greek artists and actors.

A team of Eastman students and alumni performed in the inaugural Ritsos Project in July 2015, premiering ten new art song compositions in Athens. They then traveled to Samos, where an exhibition of local art was held in conjunction with a free recital series and the commissioned art songs were performed for a packed house.

The Eastman and local communities can learn more about The Ritsos Project on Tuesday, February 16 in Hatch Recital Hall. At 1:30 p.m., Mellos will give a lecture describing the 2015 festival activities. At 3 p.m., Professor Gail Holst-Warhaft of Cornell University will discuss Ritsos and his relationship to music, focusing on composers with whom he collaborated during his lifetime. She will then read Ritsos’s poem in English and Greek with Eastman musicians performing the incidental music written by the Eastman composers, creating a seamless work of poetic and musical art. 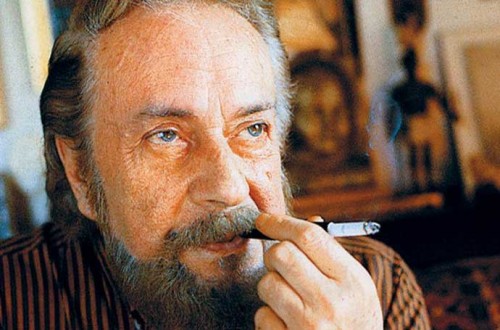 “Ritsos’s poem references the Beethoven piano sonata; in fact the last lines of the poem describe how the narrator realizes that during the entire encounter described in the poem, he has been hearing the opening of the first movement in the distance on the radio,” explained Mellos. “We took this line as a source of musical inspiration and found ways of abstracting the Beethoven original to create our own incidental musical fragments. I took the bass line of Beethoven’s sonata and used the descending line to form a chaconne. Clay’s fragment inverts the famous arpeggios of the Beethoven upwards and presents them as fragile harmonics on the guitar to create an eerie and distant association with the original music. Zach’s fragments borrow from Beethoven’s harmonic scheme to create very rich sonorous chords that pulsate and quiver from small movements of the ensemble. And Daniel Pesca’s ‘Bear Dance’ reinterprets Beethoven’s classicism with a neoclassical approach to scoring and melodic control to create a playful but also macabre dance. “

Aristea Mellos was born on the island of Crete and grew up in Australia, where she studied at the Sydney Conservatorium of Music. She is a winner of the Gallipoli Song Competition and her works have been performed in Greece, the United States, and Australia by ensembles including the Cuong Vu Trio, Ensemble ExhAust, Eastman BroadBand, and the Australian Youth Orchestra. She is the recipient of grants from the Presser Foundation, the Australia Council of the Arts, and the American Australian Association. Her honors include the Howard Hanson Ensemble Prize, the Bernard Rogers Memorial Prize, and the Belle S. Gitelman prize.

The Ritsos project is supported by the Presser Foundation, the Eastman School of Music, and Albert Augustine Strings.

You can read Yiannis Ritsos’s “Moonlight Sonata” here, and a recording of the poet reading part of his work here.