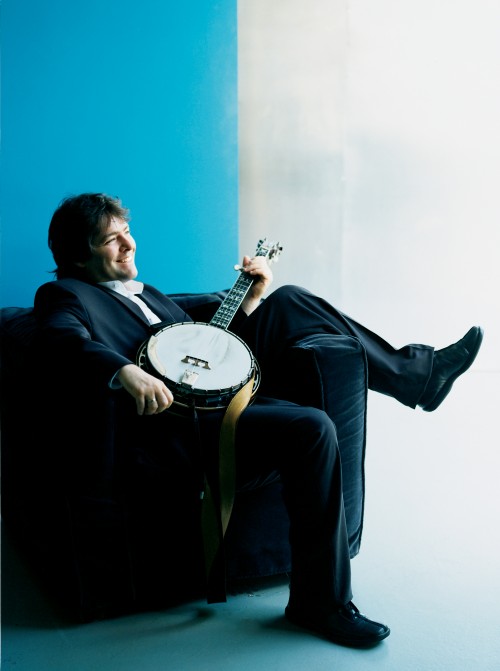 By Tahlia Cott On Thursday February 25, join us for a special opportunity to engage in an informal exchange with Bela Fleck about his career, and watch as he collaborates with two Eastman student music groups in an informal rehearsal setting. (And there just might be a few minutes of him performing!) Mr. Fleck will also be performing with the Eastman Wind Ensemble in Friday, February 26, and participating in a number of events at Eastman during the week. In this special event, jointly sponsored by the Institute for Music Leadership and the student performing group Eastman Americana, Eastman music education professor John Fetter will moderate a Q&A session with Mr. Fleck about his career. Mr. Fleck will then work with two student groups who will perform for him and receive feedback. Mr. Fleck began his musical career around the age of 15 by exploring bluegrass styles, eventually joining the progressive bluegrass band New Grass Revival in the 1980s. Around that time, Mr, Fleck, along with bassist Victor Wooten, formed his band, the Flecktones, combining elements of rock, jazz, and world music. Fleck has also collaborated with numerous other well-known artists throughout the span of his career, including Edgar Meyer, the Dave Matthews Band, Phish, Chick Corea, and many others. From Bela Fleck’s website: “Just in case you aren’t familiar with Bela Fleck, there are some who say he’s the premiere banjo player in the world. Others claim that Bela has virtually reinvented the image and the sound of the banjo through a remarkable performing and recording career that has taken him all over the musical map and on a range of solo projects and collaborations. If you are familiar with Bela, you know that he just loves to play the banjo, and put it into unique settings.” BÉLA FLECK Thursday, February 25 2:30 ‐ 4:30 p.m. Messinger One Register HERE before February 18. This event is jointly sponsored by the Institute for Music Leadership and Eastman Americana at the Eastman School of Music.