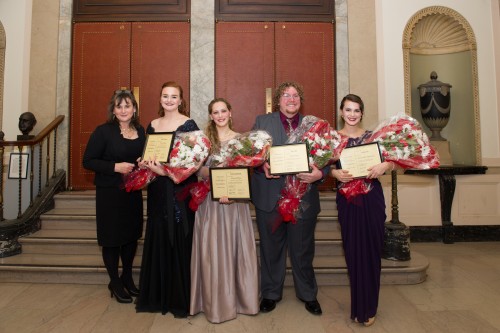 Adjudicator Kim Witman of the Wolf Trap Opera Company, with the prizewinners of the 2016 Friends of Eastman Opera Voice Competition. From left to right: Keely Futterer, Emily Helenbrook, Alan Cline, and Emily Siar.

This is the first of a two-part blog post featuring discussion with the prizewinners of the competition.

Alan Cline, of Wellsburg, West Virginia, is a second-year Master’s student from the studio of Jan Opalach. He performed “Avant de quitter ces lieux” from Gounod’s Faust and the Count’s Aria from Mozart’s Le nozze di Figaro with An Wan Chen, piano. 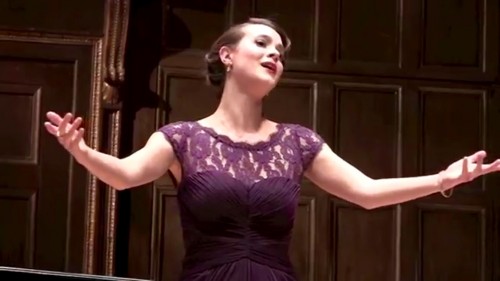 Please tell us more about the repertoire you performed for the competition.

Emily: The pieces that I chose for the competition are not performed as often as some more standard repertoire, so I was really excited to share them with the FEO audience. The Weber is so much fun to perform because the recitative section is essentially one big joke. Agatha, who is soon to be a bride, has a horrible premonition that something terrible will happen at her wedding. To try to cheer her up, my character, Ännchen, tells a ghost story in which the ghost turns out to be none other than the watchdog. It is a very lively aria with some fun high notes! “Che fiero momento,” is from Gluck’s rendition of the classic story of Orpheus and Eurydice. Eurydice is devastated that Orpheus will not look back at her and believes that he no longer loves her. This piece is very dramatic and was great fun to perform.

Alan: “Avant de quitter ces lieux” was, for better or for worse, one of the first arias I ever worked on when I began to study voice privately. While this means that I have had it in my body for a long time, it has traveled with me through the changes and the different approaches. Even so, it seemed to be a natural choice. And as for the Count’s Aria, it is a whole lot of fun. You get to be a person who has gotten exactly what they want their entire life and who now is facing denial for the very first time and it drives him crazy. And considering that I’m performing the complete role on the Kodak Hall stage in a couple of months, I wanted to give the aria another public outing before it happens in the show.

Could you elaborate on your preparation for the competition?

Emily: I chose my repertoire last semester, so I had a good amount of time to prepare. From working on specific technical challenges to crafting a strong dramatic interpretation, there was a lot to consider. I spoke through my texts often to discover an effective dramatic reading away from the music and to improve my facility with the language. I was privileged to have a lot of help preparing from my studio teacher, Professor Cowdrick, coach Benton Hess, collaborative piano professor Dr. Jean Barr, director Stephen Carr, and my German coach, Frau Balsam. Each of these faculty mentors helped me to delve deeper into the layers of these pieces. My collaborative partner, Rosa Egge, was wonderful to work with throughout the rehearsal and performance process, and created a colorful sonic setting for the drama of these pieces.

Alan: I tried as much as I could to treat this competition like any other performance. I had no special preparation rituals or any significant extra lessons or coatings. I spent the time before the competition talking with friends and competitors and telling bad jokes, which is honestly how I try to live every day.

What parts of your Eastman training and experience do you feel contributed most to this achievement?

Emily: The tremendous support of the faculty mentors I mentioned has been the most rewarding part of my Eastman training. Each offers a unique perspective that shapes me as a musician and person. Eastman is such a nurturing environment in which to grow. I have felt validated and accepted for where I am on my own journey and, at the same time, challenged and inspired to grow. The support of fellow singers also sets Eastman apart. Hearing your friends cheer you on makes a big difference when you’re onstage. Because I feel safe in this environment, I am more comfortable taking chances and playing around on stage, which has made performing more interesting and more fun.

Alan: I feel like the tiring schedule that students have to keep in order to maintain their academic and performance standards tends to create people who, although tired, are always prepared to perform at the highest level. It is so unique in an academic setting to find so many all-around achievers who can go directly from a theory or music history class onto a stage with no down time. It’s another reason that the Eastman School is such a brilliant place to be.

I wish that more people could understand the atmosphere of the green room while this competition was underway. Every single one of the nine singers spoke to every single other person involved, was kind to those around them, laughed (often too loudly), joked, and supported their fellow competitors to the very end. I am confident in saying that this beautiful expression of humanity is something that is not only rare in schools worldwide, but downright unheard of in a conservatory with such remarkably high standing as Eastman. If there is any doubt that the Eastman School, along with its friends and supporters, is the most wonderful place to begin or continue your musical journey, let it come to rest in the community of absurdly talented friends who will be your family through the halls and classrooms and into the world outside. Nowhere but Eastman. 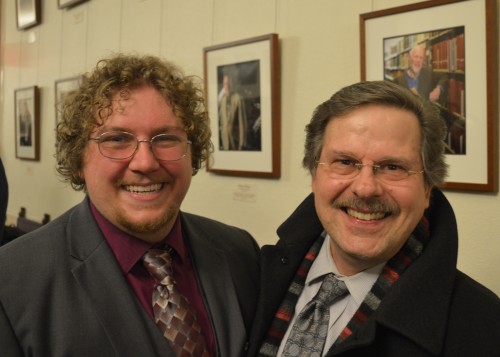 Do you have any advice to share with your Eastman peers who are interested in performing in this competition, specifically or other national and international competitions?

Emily: Have fun! Everyone in the audience or adjudicating wants you to succeed. By the time the competition rolls around, you have put in lots of time honing your craft in the practice room and in studio. Now it’s time to be in the moment and to share your joy of singing with everyone who has come to hear you.

Friends of Eastman Opera has for long been a very supportive organization for Eastman’s opera activities. Could you talk about what their support has meant for you, your peers and the opera productions at Eastman?

Emily: As a relatively new Eastman student, this was my first chance to really interact with FEO. It is amazing to see how passionate this organization is about opera and helping students on this career path. It can be daunting to seek out a career as a musician, but meeting people who are so enthusiastic in their support of our work reminds us why we chose this field and is immensely encouraging as we move forward. Thank you, FEO, for all that you do for us!

Alan: Nowhere in the world is there a group of people so dedicated to the continuation and development of the vocal arts through supporting the next generation of opera singers. The men and women who give their time, talents, and compassion to those of us who desire to share the craft are a blessing, whether outright or working in the background, to every single student in the Voice and Opera Department. There is no way that we could ever thank these saints enough, but that shouldn’t stop us from trying!