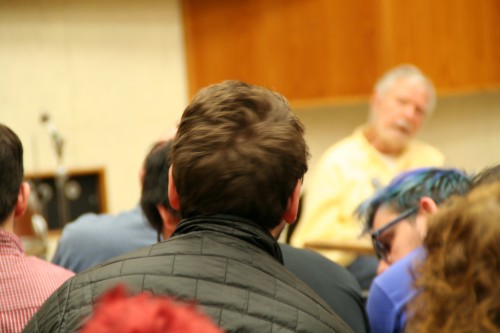 On Wednesday, February 11, during the second installment of Bill Holman’s visit, students, faculty, and some community members quickly filled in the Ray Wright Room. Holman’s afternoon started with an informal talk about his life and his work.

Holman started off this session as he did in his last session; little introduction, and right down to business. The whole session was an exploration of Holman’s life, from its beginning, to the formation of his own band in the 1970s.

He began by speaking of his early life in California, in a small town with no prominent musicians or a music scene to speak of. Holman said that his exposure to music came from listening to the radio; he heard bands of all kinds, and that inspired him to get into jazz. He mentioned in his talk yesterday that he had very little experience in classical music, which is where many jazz composers and arrangers get their start.

He eventually made his way into the Navy, and after convincing the military that going into music was best for him instead of pursuing a degree in engineering, he eventually found his way into Stan Kenton’s band. After he was asked to write two pieces for Kenton, which Holman describes as “total failures” because he was “trying to impress Kenton… and doing things (I) didn’t know how to do,” he auditioned for the band. After getting in as a tenor sax player, he would eventually start doing pieces regularly for the band, with a lot of encouragement from Kenton. Though he did say that he eventually left the Kenton band to pursue his own band, by telling Kenton “because your band can’t swing!”

Holman also infused stories of Woody Herman, Gerry Mulligan, and Bob Brookmeyer with his dry sense of humor. Much appreciated was Holman’s brief journey into film scoring, including his first film, Swamp Women. He described the movie and the music he did for it, which he claimed he had no idea how to do, as terrible, and said that the “movie never went away.” Band mates and friends would tease him about it, and even his son got him a video of it.

Holman would later visit Jazz 90.1 WGMC-FM to discuss his life and music with station programmer and host Derrick Lucas.

Holman spent Wednesday evening splitting his time between the Eastman New Jazz Ensemble and the Eastman Lab Band. He spent the most time with the New Jazz Ensemble working on swinging together, and agreeing as an ensemble on how to swing. The Lab Band spent its time working on “The Primrose Path” and “Blue Daniel”, charts that have Holman’s trademark harmonic density, on how to blend effectively.