Bill Holman at Eastman: Day One 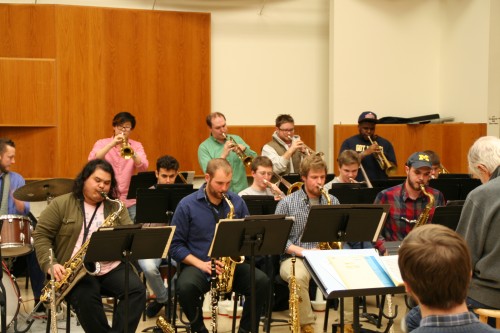 The great jazz arranger and composer Bill Holman is in residence at the Eastman School of Music this week. Besides rehearsals and meetings with Eastman students, the Eastman Jazz Ensemble will premiere Holman’s “Arbitration” at a concert tonight, Thursday, February 11, in Kodak Hall. Admission is free.

The Eastman Jazz Ensemble students in the Ray Wright Room on Tuesday were setting up, warming up, and chatting before a rehearsal. Time was rolling along as usual, until a certain figure walked into the room, a slender, older man of average height. A hush came over the students, vaguely reminiscent of grade schoolers when the principal walks in.

This man is Bill Holman, who is now 88. Though he never seems to win any popularity contests or achieve household-name acclaim, he is revered in the jazz world as one of the most important living jazz arrangers and composers. As an art form that is constantly changing and evolving, jazz needs writers like Holman to learn from.

The three-time Grammy Award-winner, NEA Jazz Master, and DownBeat award winner is known primarily as an arranger, although he has done some composition, as one of his Grammys, his work “View from the Side,” was for a composition. In the jazz world, an arranger is someone who takes a pre-existing tune, which is a melody with chord changes, and reinterprets it in a different context for a group of musicians.

Holman began his career in the Stan Kenton band in the 1950s, when he first signed on as a tenor sax player and eventually became a prolific writer for the group, including the widely acclaimed album, Contemporary Concepts. Holman is credited with bringing a swing feel into the Kenton band’s more progressive sound.

His visit at Eastman began with this rehearsal with the Eastman Jazz Ensemble, where the band played all pieces of Holman’s, ranging from “View from the Side,” a uniquely percolating version of “St. Thomas,” and a new piece that commissioned by Eastman, “Arbitration.”

The band played well, despite only having played the music for a limited time beforehand. The most time was spent on “Arbitration,” between clearing up confusion between the individual parts and the score, and fine tuning some of the more difficult sections. At the workshop Holman hosted, the band would later learn, that this piece revolves around the harmonic tension between two voices that open up the piece, and how they resolve. Holman detailed how resolution of these parts resolved with an open fifth, and how other voices aided in the piece’s development and resolution, hence the title.

In the aforementioned workshop, students got a peek into Holman’s process. He discussed his beginnings in arranging, from “having no clue what (he) was doing,” to expanding on ideas of counterpoint and unusual dissonances, both of which have become hallmarks of Holman’s work. Most notably, Holman said that his process involves very little planning out, and that most of it is “serendipitous,” although he admitted that currently he spends more time “sketching out” his work. Students remarked that they enjoyed this element to music; surprises, quirks, and humorous interludes or ideas that also didn’t feel out of place.

Another element of Holman’s music that makes his arrangements unique is his frequent use of reusing thematic material. By using so much theme material in his music, he has mastered the ability to make an arrangement sound like a new composition.

Students and faculty are looking forward to Wednesday’s activities, which include an informal talk on his life, a visit to Jazz90.1 WGMC-FM, and another rehearsal with the Eastman New Jazz Ensemble and the Eastman Lab Band. 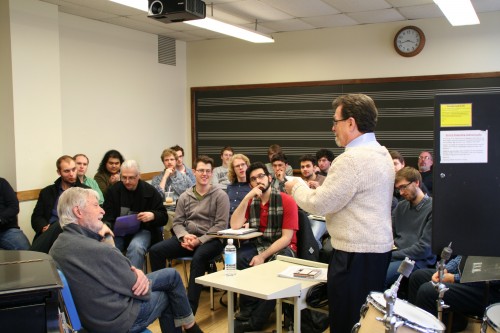