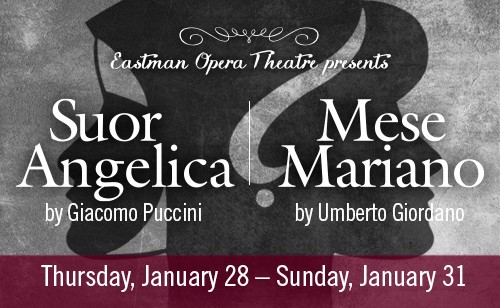 This weekend, Thursday, January 28 to Sunday, January 31, the Eastman Opera Theater will present a double-bill of Giacomo Puccini’s Suor Angelica and Umberto Giordano’s Mese Mariano. While the Puccini is a well-known work and the Giordano is rarely performed, both of the one-act operas present stories of maternal love and loss; parallel stories of young unmarried women, who give up an illegitimate child.

Can you give us some program information about the two operas that will be performed?

Suor Angelica is the second of Puccini’s Trittico of one-act operas, and the composer’s personal favorite. It has enjoyed consistent production success since its premiere. Mese Mariano premiered in 1910, just eight years prior to Suor Angelica, but is rarely performed, and only 35 minutes long, about half the length of Suor. I haven’t been able to find any written account of Puccini’s knowledge of Mese, but it is difficult to imagine that he was completely ignorant of its existence. Based on a play by the same name that had enjoyed great success throughout Italy, and composed by Giordano (one of Puccini’s best-known contemporaries) Mese Mariano was well received by its audiences.

Both operas present stories of maternal love and loss. Could you briefly elaborate on this? What was the inspiration for the theme of this double bill?

The similarities between the operas are striking, not just in terms of plot, setting, and character, but also in the exploration of one unifying thematic thread: confinement. Carmela and Angelica are both imprisoned by their circumstances, by the judgment of their families, by a patriarchal society, by the dictates of their religion. The fact that Mese Mariano is a story so easily transplanted to a more modern setting (we are placing the story in the 1970s) is a sad testament to how little these factors have changed for women since its original setting, the 19th century.

Each performer in Suor Angelica plays their doppelganger in Mese Mariano. Could you tell us more about this aspect of the production?

I knew from the moment I got to know Mese that it would be a great experience for our students to sing both pieces, and that the questions posed by the pairing would be made all the more compelling for our audiences by seeing both stories told by the same performers. Some of the characters in Suor are similar to their counterparts in Mese, and others are quite different. The process of plumbing these contrasts with the students has been fascinating and rewarding, and I hope it has driven them to explore their characters to a depth that they will extend to all the roles they take on after their time at Eastman.

The verismo operatic tradition (of which both Puccini and Giordano are considered adherents, to varying degrees) sought to portray the world more realistically, focusing not on stories of nobility or gods, but on the melodrama of everyday people’s lives.

Puccini tells his story on a grand scale, as if filming with a wide-angle lens. He devotes much of Suor Angelica to showing his audience the fullness of daily life in the convent, gradually building the opera to its grand catharsis as Angelica is miraculously released. Giordano, on the other hand, takes us on an inverse journey, narrowing his focus and turning it inward. The first and last voices we hear are those of young orphans playing, the music folksy, buoyant, and playful. Giordano saves his most dramatic, complex musical gestures for the gritty details of Carmela’s back-story. In fact, almost one third of Mese Mariano is devoted to Carmela’s heartbreaking recollection of her past, while the specifics of Angelica’s life before the convent remain a mystery. The result, I think, is a much more fully fleshed protagonist in Carmela, and in half the time.

Is there any additional information about the production you’d like to add?

As far as I’ve been able to determine, this is the first time that Suor Angelica and Mese Mariano have been performed side-by-side, which surprises me. We have added to our performance of Suor Angelica the Aria of the Flowers, which was cut from the score early in the life of the piece. Puccini himself, however, never liked this cut, insisting that the aria was crucial to understanding Angelica’s mental state as the end of the opera approaches. Indeed, the layering of its whole tone and Dorian colors eerily reflects Angelica’s fraying sanity, and may sound, to an opera fan’s ear, like a little taste of Puccini’s final masterwork, Turandot.