“ALL MUSIC WAS BRAND-NEW ONCE”: an interview with Peter Kolkay of Dark in the Song 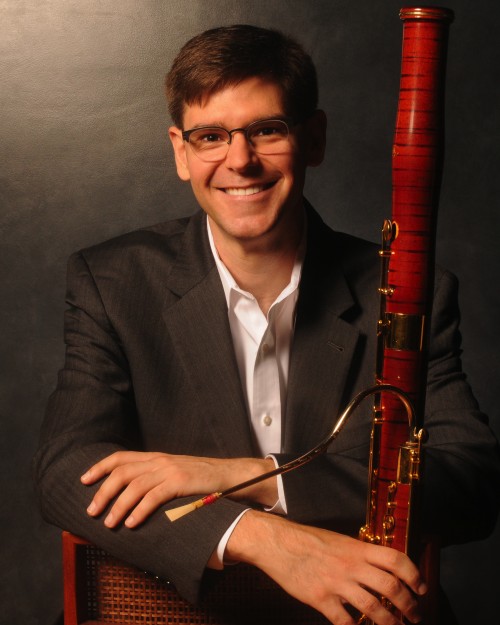 No matter how many chamber music concerts you’ve attended, you’ve probably never heard anything quite like Dark in the Song. This “contemporary bassoon collective” of five top-notch American bassoonists has essentially created its own repertoire since its members began playing together in 2010, commissioning an enormous amount of bassoon ensemble music and sharing it with the world through highly-acclaimed recordings and performances. Dark in the Song has emerged as one of the most notable and adventurous ensembles performing today; the American Music Center calls them “a veritable all-star team of bassoonists who like new music.”

July 2016 will bring four members of Dark in the Song to Eastman for the first-ever Eastman NewBassoon Workshop: four days of seminars, solo and ensemble classes, recitals and a contemporary bassoon performance competition (visit http://summer.esm.rochester.edu/course/eastman-newbassoon-workshop/ for details). Here, Dark in the Song member and Eastman alumnus Peter Kolkay (MM ’00), currently Associate Professor of Bassoon at Vanderbilt University’s Blair School of Music, answers questions about his time at Eastman, Dark in the Song’s world of contemporary bassoon music, and the upcoming Eastman NewBassoon Workshop:

How did your studies at Eastman prepare you for what you do today? Who were your role models at Eastman, and what did they teach you?

Eastman was integral in what I do as a musician today. I don’t recall playing in bassoon ensembles at Eastman, but I did do lots of chamber music there. And I played in every Musica Nova concert I could get myself rotated into and spent a lot of time at Ossia rehearsals too. I’d gone to a very small college for undergrad, so Eastman provided my first exposure to actually performing contemporary music of all sorts–from Feldman to Ligeti and back again. [As for] role models, I can think of three immediately: John Hunt, my bassoon teacher; Jean Barr, my sonata/chamber music coach; and the late Mary Wallace Davidson who was the head of the Sibley Library. From Mr. Hunt I learned the importance of exactitude–pitch, rhythm, timing, [and] technique have to be spot-on, especially in contemporary music. From Dr. Barr I learned how to get beyond my own part and really listen to music while performing. And from Mary Wallace Davidson I learned that curiosity is one of the most important aspects of being a musician, both in and out of the library!

How did Dark in the Song come to be? How long have you been playing together?

There are five of us in Dark in the Song, and four will be at the ESM NewBassoon Workshop. Our paths as students intersected at various points–three of us went to Eastman (myself, Michael Harley [DMA ‘11], and Lynn Hileman [DMA ‘05]) but not at the same time, and there are other various school/teacher connections (three went to Yale; two to Cincinnati). Finally we all ended up in teaching positions in the southeast US and got together as a quintet (some of us finally meeting for the first time!) in 2010.

How does the ensemble work? How do you find music to play?

A lot of our repertoire is either composed specifically for us or arranged by members of the group. Our general approach to repertoire is to play everything: if a piece comes our way, we try to find a place for it in a performance. As we’re all active in new music we try to “drum up business” with the composers we meet–we find that composers are usually taken with the uniqueness of the ensemble and the sonic possibilities of what five bassoons can offer.

People are most surprised by the sonic possibilities of a group of bassoons; many audience members know the bassoon as the “clown of the orchestra” or as a more somber lyrical instrument. But when multiple bassoons are massed together and the possibilities of range, articulation, and timbre are explored, an entirely new sound world opens up. The overtones of the bassoon coalesce in a unique way and they can produce a “glow” of sound. A good bassoon ensemble piece has the same traits as any good piece: it has to be well-written for the instruments and have something specific to say in sound.

Tell us about the Eastman NewBassoon Workshop. What will be unique about this institute? What events are planned?

As far as I know, this is the first multi-day intensive institute dedicated to contemporary bassoon performance in the United States. We’ll have sessions on topics such as multiphonics, extreme range playing, flutter tonguing, circular breathing, looping, etc. Each of us in the ensemble has different strengths and interests, so we can cover a lot of ground during the workshop. And we’ll have a few performance sessions too, involving both faculty and students. We’re happy to welcome qualified individual bassoonists from high school through professional level (there aren’t many pre-formed bassoon ensembles out there, but if a group applies we’d love to have them).

The performance competition is designed to give talented students a chance to demonstrate their abilities in contemporary music as well as identify players to participate in a performance of Michael Gordon’s Rushes, a concert-length work for seven bassoons that will be performed during the workshop.

You work extensively with contemporary composers, both as a solo musician and as part of Dark in the Song. What is especially satisfying to you about contemporary music?

I have always been drawn to contemporary music in both solo and ensemble settings; part of the attraction is the sheer challenge of creating a performance of a work that is often unknown in style to an audience, and part of it is the “anything goes” spirit that informs so much new music-making. All music was brand-new once, and I’d like to think that the first performers of Monteverdi’s Orfeo or Beethoven’s 9th felt the same thrill that performers of new music do today. Performing new music actually just carries on a tradition that has been around for a very long time.

For more details about the composition competition and about Dark in the Song itself, visit the group’s website: http://darkinthesong.org.