This month, the Eastman School of Music has been a temporary home for the 200-year old double bass once owned by Serge Koussevitzky (1874-1951), famed Russian double bass virtuoso and longtime music director of the Boston Symphony Orchestra from 1924-1949. Last month, Madeleine Crouch, the Director of the International Society of Bassists, reached out to James VanDemark, Professor of Bass at the Eastman School, about temporarily adopting the bass after it underwent repairs by Rochester luthier Michael Griffin. VanDemark, who has close ties with the instrument, gladly accepted the offer.

Koussevitzky’s widow gifted the double bass in 1962 to Gary Karr, who at the time was a young double bass virtuoso and has now developed into a leading performer and teacher of the instrument over the last 60 years. VanDemark was a student of Karr in the 1970s and recounted his first experience in playing the instrument,

“In 1970, I arrived in Canada to play Principal Bass of the Hamilton Philharmonic and continued my studies with renowned bassist Gary Karr, then living in Halifax. As a lesson necessitated flying from Toronto to Halifax, I rarely brought my own bass. Karr had received the Koussevitzky bass … and as he performed on it somewhat infrequently, the instrument was often available for me to play on at lessons. It was set up rather differently from the instruments that Karr and I played (which were matching basses by the American luthier Lawrence LaMay, which enabled us to play double concertos together fairly easily) but was enormous fun and a challenge to play on considering how little time I’d have to play it.” 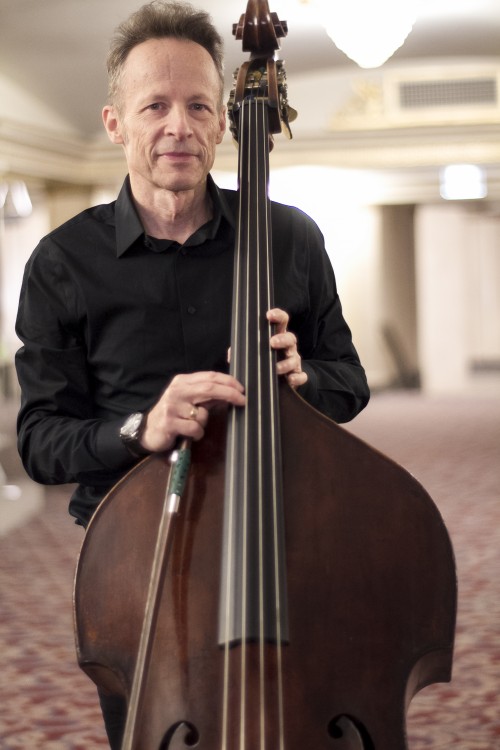 Karr donated the instrument to the International Society of Bassists in 2004 and it has made appearances at biannual conventions for the organization since, including the 2013 event at Eastman. The bass returned to Rochester in November when Colin Corner, the principal bassist of the Atlanta Symphony Orchestra, performed Koussevitzky’s Concerto for Double Bass with the Rochester Philharmonic Orchestra.

As if reuniting with the legendary instrument for the first time in nearly half a century wasn’t special enough, the opportunity to show the bass to his own students and hear them play it was a heartwarming experience for VanDemark. He said, “The delight of seeing, playing and sharing a very famous ‘old friend’ with my students that I haven’t seen in 45 years is truly a once in a lifetime experience. It is such a link to history. Koussevitzky’s performances on this bass catapulted him to fame in the early 20th century prior to – and maybe adding to – his reinvention as the legendary conductor of the Boston Symphony and a champion of American music. It’s a thrill to touch it and to play it. The sound of the upper register is absolutely exquisite.”

VanDemark’s students shared the same opinions of the instrument. Caroline Samuels, BM ’17, a sophomore bass performance student from Baton Rouge, Louisiana, says, “I’ll admit, it is very cool to play this bass. At first, I was almost intimidated to play it, and I know the rest of the Eastman students also felt intimidated to be standing in front of it. It’s amazing because this bass has been passed along thorough so many people; from Koussevitzky to Gary Karr to the ISB Society who has loaned it out to many of the world’s leading bassists. It is a cool feeling to be playing the same instrument that so many ‘greats’ have also played. This is probably the most famous bass in the world right now, and we are so lucky to have it for a few weeks.” 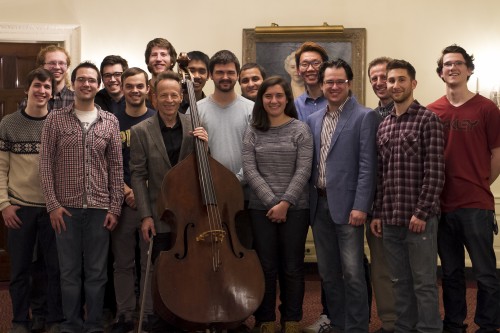 Professor VanDemark with students from the Eastman Double Bass studio and the Koussevitzky double bass.