The prospect of winning a job with a major symphony orchestra while still in school is an undeniably attractive situation for any musician. Few have done it and those who have usually go on to long, successful careers in the industry. James Wilt, the current Associate Principal Trumpet of the Los Angeles Philharmonic and Professor of Trumpet at the Colburn School achieved just that. In January 1986, just three weeks into his final semester of his Master’s degree at Eastman, Wilt won a full-time position with the Denver Symphony. This November, after nearly thirty years of full-time orchestral experience since, Wilt has returned to Eastman to finally complete his degree.

Wilt was invited back to the Eastman campus in early November to lead two trumpet studio classes in fulfillment of his Master’s degree. In his master classes, Wilt worked with undergraduate and graduate students on standard orchestral trumpet excerpts, various solos and etudes and discussed his personal preparation for auditions and performances. Additionally, Wilt generously gave private lessons to several trumpet students at no charge. 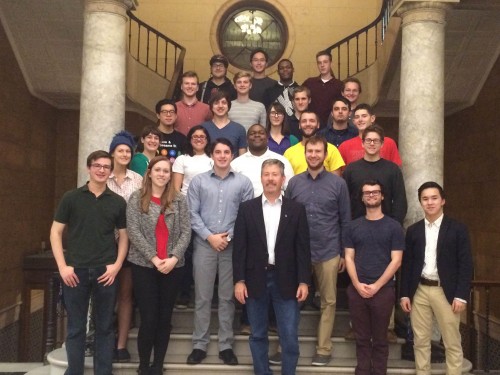 James Wilt, Associate Principal Trumpet of the Los Angeles Philharmonic, with the Eastman Trumpet Studio after a master class on Thursday, November 5.

It was not an easy decision to leave school just six credits shy of his degree. He said, “Within two weeks of the audition I had already packed up my gear. The head of graduate studies understood and granted me permission to leave the program. My mother, on the other hand, was definitely not happy about it! By mid-February of 1986, I was in Denver playing my first full-time job. It was a nice place to start.”

Wilt continuously enrolled at Eastman for several years after moving to Denver, and, at one point took an orchestration class in Colorado, applying two credits towards his degree. His final project for the course: arranging a recessional for his wedding before marrying his wife, whom he met in Denver. However, as a full-time orchestral musician, the need for a Master’s degree was not imperative. “Finally, I felt like it was never going to happen and it was a tough call for me,” he said. Wilt withdrew from school and continued to play in the orchestra.

Wilt moved to Texas, where he played associate principal trumpet with the Houston Symphony for 14 years (with the exception of a year and a half in the New York Philharmonic) and taught at Rice University. In 2003, he and his family moved to Los Angeles after he auditioned for the position he currently has today.

Eleven years later, it was Wilt’s son, Liam (BM ’18), whose own career path re-connected his father with Eastman. Liam was accepted to Eastman trombone studio and the University of Rochester’s Computer Science program. So, after a 30-year absence, Wilt returned to Eastman in August 2014 to drop his son off for his freshman year. 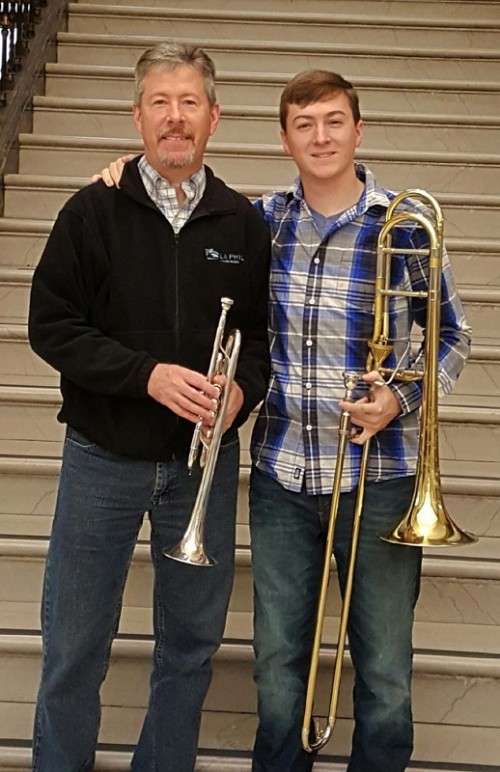 On coming back to campus he said, “It was really impressive seeing the growth of the school. Obviously the spirit is still here and there’s such a sense of history. When you walk into Lowry Hall, you say “Whoa!” It doesn’t feel like just a school but a prestigious institution.”

It was not long before Wilt and the Eastman School began to connect. “After my son started school, the alumni office contacted me to chat, see how Liam was doing. It was during that conversation that I explained that I was no technically an alum. We talked about the story of my unfinished degree. The Graduate Studies committee reviewed my resume and recording history, and came up with a suggestion of conducting master classes at Eastman to finish my degree. The dates they proposed happened to coincide with a vacation week for the orchestra so, I was able to make the trip. It has provided a nice sense of closure.”

Wilt was asked what parts of his Eastman education have proved to be most valuable in his career. He answered, “In a lot of ways, I was learning as much from the other students as I was from faculty. My teachers would say, ‘You see us for an hour a week but you see each other the rest of the time’ and encouraged us to learn from and teach each other. There’s plenty of time for the competition later, stand on each other’s shoulders now and learn from each other.”

To an ambitious room of nearly thirty aspiring professional trumpeters, Wilt shared what he believed to be the most important advice for young musicians:

“Be brutally honest in your assessment of yourself, which can be difficult to do because we may think we are being honest, but we’re not. Hold your playing to the highest level and don’t compare yourself just to people your age. Be analytical and start to address things you need to fix. It’s human nature to want to hide our warts but they won’t go away on their own… I’m not saying that we have to be perfect because even the fear of being imperfect can hurt us. Our music has to be compelling and interesting. The listener wants an emotional connection to what you’re playing. I don’t think anyone should forget that idea, no matter what they are playing.”