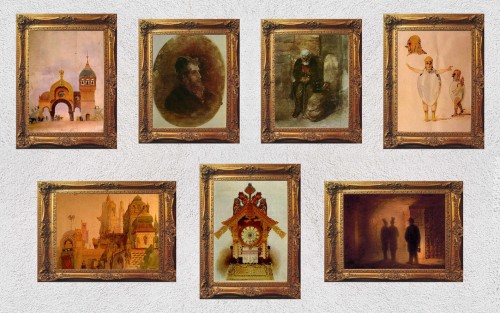 Several of the paintings by Victor Hartmann that inspired the Pictures … of Mussorgsky: Top, left to right, Plan for a City Gate in Kiev (The Great Gate of Kiev); A Rich Jew followed by A Poor Jew (Samuel Goldenberg and Schmuyle); Sketch for the ballet Trilby (Ballet of Chicks in their Shells). Bottom, left to right, The Castle at Chernomor (Il vecchio Castello); The Hut on Fowl’s Legs (Baba Yaga); The Paris Catacombs.

After a semester of tackling the repertoire of Mahler, Wagner, and Brahms, Eastman Philharmonia’s final concert of the 2015 semester concludes with Ravel’s orchestration of Modest Mussorgsky’s Pictures at an Exhibition.

In their preparation for this final cycle’s repertoire, the orchestra has been exploring the complex history of Mussorgsky’s orchestral works, and have examined excerpts from two additional orchestrations of Pictures at an Exhibition. The opportunity to engage with the work on multiple levels is a result of their collaboration with second-year DMA conducting student, Peter J. Folliard. 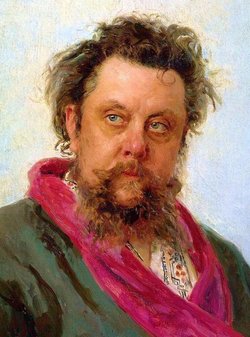 Folliard’s lecture recital, “Pictures at an Exhibition – Admiring a Masterpiece from Multiple Angles” covers a wide array of topics, including: the background of Mussorgsky’s solo piano work; Rimsky-Korsakov’s influence on Mussorgsky’s orchestral works; the practice of orchestrating and re-orchestrating works; and a picture-by-picture look at each of Mussorgsky’s movements accompanied by musical examples from the orchestrations of Maurice Ravel, Sergei Gorchakov, and Leonard Lawrence.

“It is my hope that through engaging this work in both a classroom and a rehearsal hall setting that our performance is more enriching for both the orchestra and audience,” said Folliard.

The lecture-recital takes place this afternoon, Friday, December 4, in Eastman East Wing 415 at 3:45 p.m., and the concert is on Monday, December 7, at 8 p.m. in Kodak Hall. Besides the Mussorgasky/Ravel Pictures at an Exhibition, the final program consists of Sinfonia da Camera, a new work by student composer Ricardo Acosta, and Liszt’s Piano Concerto No. 1, with soloist Jiale Li and conductor Boon Hua Lien.