I had the opportunity to talk with Thomas and discuss his competition experience and preparation.

John: Please tell us about the competition you performed in and the repertoire that you were asked to play.

Thomas: It is a wonderful competition that takes place on six different organs, some modern and some historic. Over a period of two weeks we were required to play half-hour recitals on each of those instruments, with eliminations happening after the second and fourth rounds. Of the 56 applicants, 18 were invited to compete in the live rounds. Eight competitors advanced to the semi-finals and four to the finals. At this competition most of the repertoire was chosen for us. It was tailored to suit the various styles of organs we were to play. Quite a lot of the music was from composers who have strong connections to the Erfurt/Weimar/Leipzig area, including Bach, Liszt, Pachelbel and Schumann. I also played works by de Grigny, Liszt, Messiaen, Reger and Widor. The range of organs we got to play on was wonderful, from the small Wender organ that Bach used to play in the Arnstadt Bachkirche to the enormous modern organ in Erfurt Cathedral. A particular highlight was playing on the 3-manual organ by Trost in Waltershausen, said by many to be the most authentic ‘Bach organ’ that remains with us today. Unfortunately, many historic organs were either bombed out or had their metal pipes melted down for bullets during the world wars.

John: Could you talk a bit about your preparation for the competition?

Thomas: Preparing for a competition is a long process. Repertoire lists commonly come out a year and a half before an organ competition. At that point it is necessary to make a plan about which pieces to tackle first; some works definitely take longer to settle and feel comfortable than others. It’s taken me a few years to be able to balance learning a large amount of music and have it all ready to go for a certain date, such as a competition. The hardest point for me is when my pieces are almost ready a few months before they’re ‘due’. It’s so easy to put them away and work on exciting new pieces, but I’ve found that it’s really important to keep slogging away and have everything ready as early as possible.
In competitions over the past few years, I’ve learned that I function best in when I can convince myself that it’s not actually a competition, just a performance for the fun and beauty of it. This also requires me to distance myself from other competitors on competition days, so that I’m not thinking about competing against them or wondering how my playing is being compared to theirs. However, when I’m finished playing I love meeting all the competitors, who often come from all over the world. 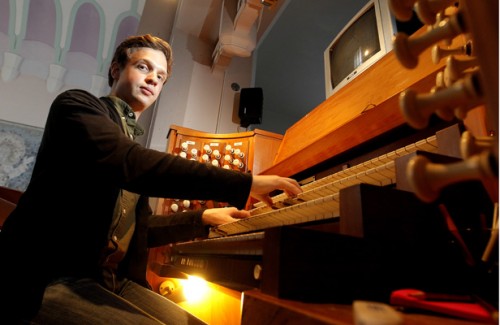 080714. news. photo: KENT BLECHYNDEN/FAIRFAX NZ. Organist Thomas Gaynor who has launched an album to help fund his Doctorate of Music in USA.

John: What parts of your Eastman training and experience do you feel contributed most to this achievement?

Thomas: Eastman has some wonderful facilities for its organ students. No organ is the same, so it’s necessary to be able to change the way you play a piece without hesitation. Being able to practice on the wide range of instruments at Eastman made it much less daunting that it could have been when I sat down at each of the six competition organs. In particular, older organs tend to have rather heavy action; the Central-German Baroque organ in Christ Church (right next to Eastman) was a wonderful tool to get comfortable with playing physically demanding instruments. It takes a while to be able to feel relaxed and play fluidly when you have to exert so much physical force just to get the keys down. In many organ competitions, a knowledge of all the trends of historical performance practice is a given. I’m very grateful for the holistic training we receive here at Eastman; it really helped me feel comfortable with each style of music in the competition.

John: Do you have any advice for your Eastman peers who are interested in performing in an international competition?

Thomas: Don’t let the horrible thought of not winning stop you from entering competitions. As cheesy as it sounds, I do believe that everybody wins in terms of gaining performance experience and learning how to make music in a very stressful situation. For me, playing in competitions has helped ‘real’ performances feel much less stressful and be much more enjoyable. Music aside, they are also a great cure for anybody with a serious case of wanderlust.

You can listen to Thomas perform some of his competition-winning repertoire in the Tuesday Pipes Series at Christ Church on December 1 at 12:10pm.