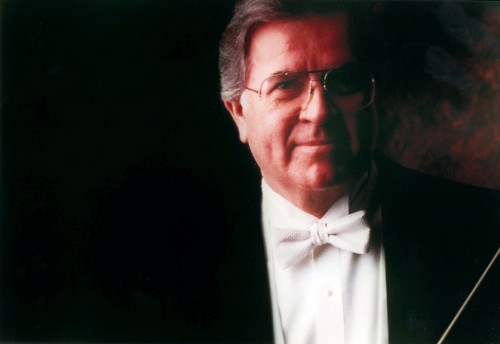 Few people have impacted the history and development of an ensemble and its repertoire more than Donald Hunsberger. The father of the modern wind ensemble, his legacy, far beyond his direct work with the ensemble, endures in the millions of people across the world who have benefited from playing his arrangements, listening to his recorded albums, and playing in local community, grade school, and collegiate wind ensembles. We are thrilled to have the opportunity to celebrate the 50th year of Dr. Hunsberger’s appointment as conductor of the Eastman Wind Ensemble, and the 40th year of the Eastman Wind Orchestra.

From Souderton, Pennsylvania, Donald Hunsberger was a performing member of the original Eastman Wind Ensemble in 1952, under the baton of Frederick Fennell. Hunsberger began his studies at Eastman in 1950 as an undergraduate trombonist, and received his Bachelor’s, Master’s, and Doctoral degrees from Eastman. In 1962, Dr. Hunsberger was appointed conductor of the Eastman Symphony Band and the Eastman Instrumental Ensemble Program. Following Clyde Roller’s departure, he was appointed conductor of The Eastman Wind Ensemble beginning in 1965.

A leader in the field for over 50 years now, Dr. Hunsberger’s legacy extends far beyond his work and performances with The Eastman Wind Ensemble. Through his countless arrangements and transcriptions, he has greatly broadened the scope of repertoire available to the wind ensemble. Not only has Dr. Hunsberger been part of hundreds of commissions and premiers, he has, through his mentorship and nurturing of young composers throughout his career, influenced the formation and growth of an original repertoire for the wind ensemble which continues to thrive today.

In addition to performing over 100 premiere performances, Hunsberger has been involved in writing projects including the books The Wind Ensemble and Its Repertoire, The Art of Conducting, The Emory Remington Warmup Studies, and numerous articles published in educational journals. He has been recognized in publications for his innovative scoring techniques for varying instrumentations of the contemporary wind band. His research into the history and development of scoring for wind bands in America has led to numerous articles in WindWorks, a journal for wind conductors, performers, and composers.

Dr. Hunsberger’s contributions to the wind ensemble have been recognized worldwide. He is the recipient of a number of awards for research (Homespun America: The National Association for State and Local Historians), pedagogy (the Eastman Alumni Teaching Award and Herbert Eisenhart Award; Wiley Housewright Fellow, Florida State University), and performance (the Crystal Award from the Asahi Broadcasting Company, Osaka, Japan; the Ehud Eziel Award, Jerusalem, Israel). He served as President of the College Band Directors National Association (CBDNA) between 1985-1987, and has served as a member of the boards of CBDNA, the World Association of Symphonic Bands and Ensembles, and the Conductor’s Guild. In the orchestral world Hunsberger has created and conducted performances of orchestral accompaniments to over 18 silent films with 50 orchestras, including the National, San Francisco, Houston, Vancouver, Utah, Virginia, San Diego, Syracuse, and North Carolina Symphony Orchestras, and the Rochester, Buffalo, and Calgary Philharmonic Orchestras.