Walter Isaacson: The Future of Innovation

October 8 – 11, 2015, marked the first year of Meliora@Eastman: the combining of two alumni traditions, the University of Rochester’s Meliora Weekend and Eastman Weekend. The long weekend was filled with interesting events on the Eastman campus. Our blogger Andrew Psarris was our “roving reporter” for Meliora@Eastman and will file several posts on different aspects of the celebration. He started out by hearing the keynote speaker, Walter Isaacson, whose thoughts Andrew tries to apply to his own career as a musician.

Meliora Weekend is always inspiring. It gives students the opportunity to talk to esteemed alumni and guest speakers. I have had the opportunity to meet Bill Clinton, Robert Gates, Doris Kearns Goodwin, and this year’s headline speaker, Walter Isaacson, who rose through the ranks to become the managing editor of Time magazine, the CEO of CNN, and now the CEO of the Aspen Institute. A prolific author, he has written biographies of Albert Einstein, Henry Kissinger, Benjamin Franklin, and most recently, Steve Jobs. 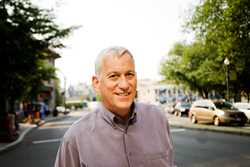 It sounds clichéd, but what Isaacson had to say was inspiring. I love music, I always have, but sometimes I wonder, “How am I going to make this work?” I sit on the line between regret and fear when it comes to deciding what next to do.

In walks Isaacson, saying that: Rochester has always been a hotbed of innovation through institutions like this wonderful music school and the University of Rochester. That’s going to be the next wave of digital revolution—those who connect the humanities and technology.

This was one of his central points, taken from his book about Steve Jobs. He went on to say that Steve Jobs was a humanities kid growing up, he was well read, and liked philosophy. Just because you have one interest does not ever mean that you cannot fully explore another and tie the two together. Even the great Leonardo Da Vinci, painter of the Mona Lisa, championed scientific research. This is where creativity comes from—combining your interests.

Isaacson spoke about true genius and people like Robert Noyce and Jack Kilby who invented the microchip; like Eda Lovelace, a 19th -century mathematician who worked on what was considered then the first computer; and like Alan Turing, the inventor of the first modern-day computer. He said true genius almost never reveals itself in the form of a singular person working in a basement; it reveals itself through collaboration with others. All of these people needed others to complete their work. “That is why it is important to have a quadrangle at your school,” said Isaacson. What he means is it is important to have a physical space where people who would never see each other can casually stumble upon ideas together. At Eastman we have Lowry Hall, which acts in this capacity as “our quad.” 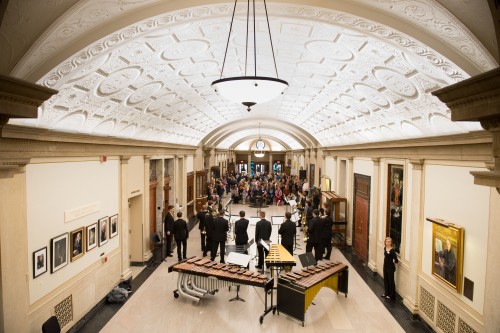 When Steve Jobs was rehired by Apple, he sought to create an environment where people were always bumping into each other. Instead of disjointed buildings loosely formed into one company, he created a central hub. Within that hub ideas could be expressed and collaboration and teamwork would flourish. This was the central idea behind Jobs’ greatest accomplishment—creating a team that could take over when he was gone.

Next Isaacson spoke of pure curiosity—the seed from which everything else grows. Loving learning, and having an insatiable appetite for figuring things out, is another component of these great innovators. Isaacson again talked about Leonardo Da Vinci: “In his journals he writes very specific things such as, ‘Why is the sky blue?’ or ‘How do birds fly?’ Later, Da Vinci’s need for an answer drove him to figure these things out, despite the minimal advances in science and technology during his lifetime.

Another example is Albert Einstein. Hundreds of great physicists were working on perplexing problems in the early 20th century, but it was a Swiss patent clerk whose curiosity jumped out of the pages of history and who wrote the theory of general relativity. In many ways this is the frontier—our ability to satisfy our need to figure things out.

Finally, we come to humility. In the 18th century Benjamin Franklin started something called the Leather Apron Club, which met to discuss and debate questions of morals, politics, and natural philosophy. During this time Franklin wrote down his 13 virtues—a system to develop his character, but for a while the 13 virtues were only 12. He would work tirelessly to develop these virtues, which included temperance, silence, order, justice, and so on. Finally, after mastering the 12 virtues, he wrote down his accomplishments and handed out pamphlets to his fellow Leather Apron Members outlining what he did. After looking at his accomplishments, a fellow member looked with incredulity at Franklin and said, “I think you’re missing a virtue.” As you probably guessed, that virtue was humility. Indeed, if one reads Franklin’s 13 virtues, humility follows all the rest, with the exhortation, “Imitate Jesus and Socrates.” He recognized that he wasn’t very good at humility, “but I am good at the pretense of humility.”

Sometimes, Isaacson went on, that is all we need: a pretense of humility, not necessarily humility itself. It affords us a moment to listen to try and consider an opposite opinion, it allows us a moment to be interested in what someone else is saying, and it helps cultivate a community of collaboration.

All of Isaacson’s essential points center on a common theme: the future is there for the taking if we can apply the great lessons these innovators taught us. Isaacson closed using the metaphor Jobs described to him on his deathbed. To paraphrase Jobs: “I always thought that life and knowledge was a river never ceasing and endless and what is important is how much you were able to pull from the river, but now I realize that its how much you put in that really matters.” This is more than relevant as a musician.

For me personally, this talk reminded me that music can complement everything else I do. There are careers at the crossroads of the arts and technology that will provide sustainable futures for those who are willing to be curious and collaborate with others. When Jeff Beal was here last year, I told him I am a trumpet performance major, a financial economics major, and a physics minor. He was taken aback and said, “You know, there need to be people combining those interests.” The great innovators are doing this already, and as a part-time musician and part-time academic, it’s great to know there are people who value the bridges between the two.