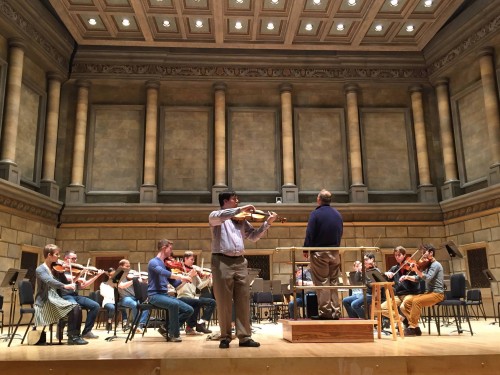 It’s rare to see the Eastman Student Symphony Orchestra and Philharmonia share the stage in Kodak Hall, but Maestro Neil Varon wanted to feature both orchestras during this special “homecoming” concert on Saturday, October 10 at 8 p.m.

The program will begin with Smetana’s The Moldau and conclude with Brahms’ Symphony No. 2 in D Major. Between these two masterworks, we are excited to be be performing the North American premiere of Nicolas Bacri’s Piccolo Concerto Notturno for solo viola and four-part viola ensemble.

French composer Nicolas Bacri (b. 1961) is no stranger to Eastman, nor to Eastman’s world-renowned viola studio. In 2012, Eastman hosted the International Viola Congress and performed Bacri’s music. Bacri was in attendance, and was so impressed with what he heard that he approached the Eastman Viola Ensemble and asked if they would be interested in collaborating on a work for viola solo and viola ensemble. The Piccolo Concerto Notturno is the result of a co-commission between Eastman and the Paris Conservatory. 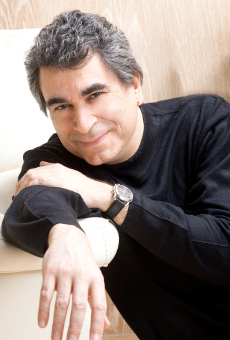 “When I first started work on the Bacri, I had a sort of “musician’s block”; I didn’t
exactly know where to even begin, or even what to begin with. I had experience on
learning new pieces of music, but all of them had been freshly composed short
pieces with the guidance of their composers for a world premiere of around thirty or forty people. Until I met back up with Prof. Rodland and Prof. Irvine at the Bowdoin International Music Festival this past summer, I was totally on my own, with essentially only the tools and techniques I’ve learned over the years.

The amount of freedom I had with the piece was actually paralyzing me from getting any quality work done on it. Leading up to Bowdoin, the concerto was essentially small, related fragments that weren’t really all that well held together. It was at Bowdoin that I truly began to develop the fragments into something more convincing: more like a full work of art.

In my lessons, the relationship between teacher and student became less about me getting directions on how to approach the concerto, and more about my teachers providing suggestions and ideas and working with me directly – and, arguably,
more as a professional.

Those six weeks of intensive work on the Bacri not only helped me really develop my interpretation of the concerto but also my mindset as a musician. Musically, I had reached a higher plane of understanding: my mind was constantly in motion while playing, continuously searching for things in the music to bring out; melodies, intervals, phrases, everything. I was now able to fully embrace the freedom that previously constricted me and play the concerto for what it was: a complex work for viola.

The last couple of weeks leading up to the competition were both an incredible learning experience and a time of stress. Being able to listen to all the different (and I do emphasize “different”) yet equally convincing renditions of the concerto immersed me in the piece once again; I heard new aspects of the piece I had studied so hard but that were previously unknown to me.

Unfortunately as a result of this, I became more doubtful of my own interpretation, and felt I was still so far from reaching the true potential I knew the concerto had. So, I was inspired to take a fine-tooth comb to the work and give it the final touches that made it that much more complete.

In all honesty, winning the competition was trivial in comparison to the journey this piece was. As a musician, I have matured so much in a relatively short amount of time, and have been given a new fire that is motivating me to really give the Bacri everything I have to offer and more.

As the concerto’s North American premier is less than a week away and rehearsals with the orchestra are going on without a hitch, I am truly excited to share this magnificent work with the American audience.”