“If Music Be the Food…” Plays On this Sunday night

Wonderful musical opportunities are everywhere in Rochester, but one such opportunity is unique. If you like to listen to music and give back to the world, then “If Music Be the Food…”, the concert series benefiting Rochester’s Foodlink, is for you! This week’s concert will open its seventh season with an exciting program of chamber music by Leclair and Dvorak, and operatic arias by French composers, on Sunday, October 18 at 7:30 p.m. at St. Paul’s Episcopal Church, 25 Westminster Road in Rochester.

“If Music Be the Food…” was created in 2009 by Carol Rodland, Professor of Viola at the Eastman School of Music, as a grass-roots community endeavor whose mission is to increase awareness and support for the hungry through the sharing of beautiful music. Members of the Eastman faculty, the Rochester Philharmonic Orchestra, other local professional musicians, distinguished international guests, and Eastman students, who through the project learn about the importance of utilizing their art for community service, join together and donate their time and talents for these concerts. 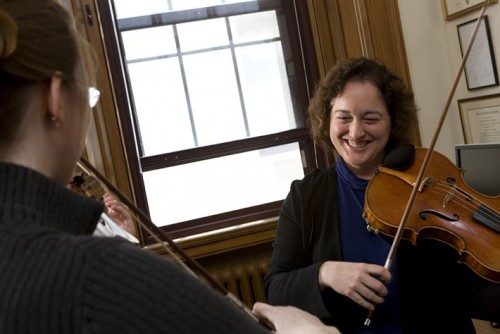 Eastman faculty Carol Rodland teaches viola to a student in her studio. April 2010.

All participants in every aspect of this endeavor volunteer their services and pay their own costs, so that all proceeds can go to the hungry via Foodlink. No tickets are sold for the concerts, rather, audience members are asked to bring non-perishable food items or cash donations as the price of admission. Last season’s concerts garnered more than $3500 and nearly 900 pounds of food for Foodlink. See the “If Music Be the Food…” website for more information.