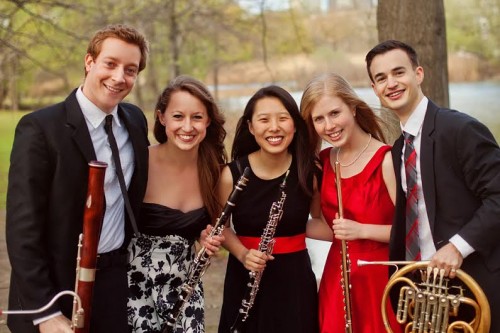 The Eastman Wind Ensemble is gearing up for an exciting second concert of the year, this Friday, October 16, at 8 p.m. in Kodak Hall at Eastman Theatre. As part of an effort by conductor Mark Davis Scatterday to bring young alumni back to Eastman to perform with the Eastman Wind Ensemble, the Midic Winds will be joining us for a performance of Robert Russell Bennett’s Concerto Grosso for Woodwind Quintet and Wind Orchestra.

The Eastman Wind Ensemble will also welcome guest conductor Bruce Burritt, Co-Conductor of the Eastman-Rochester New Horizons Bands. Mr. Burritt will be conducing John Barnes Chance’s Elegy, a work he commissioned in 1971 in memory of a high school student in his band at West Genesee. The program will also include Donald Crockett’s Island and Adolphus Hailstork’s American Guernica.

The Midic Winds — flutist Johanna Gruskin (BM ’13), oboist June Kim (BM ’14), clarinetist Rebecca Tobin (BM ’14), bassoonist Quinn Delaney (BM ’14), and hornist Russell Rybicki (BM ’13) — formed at Eastman in 2012. In May 2013, they were awarded the bronze medal in the senior wind division of the Fischoff National Chamber Music Competition, and were also finalists in the J.C. Arriaga Chamber Music Competition in Stamford, Connecticut. In October 2014, they were featured performers on the Matinee Musicale chamber music series in Duluth, Minnesota. As advocates of music outreach, the Midic Winds have performed concerts and master classes in Rochester; Boston, Massachusetts; Duluth, Minnesota; and Chicago, Illinois area public schools and community centers. As part of their commitment to new music, the ensemble worked with composer John Harbison on his Quintet for Winds.

The Midic Winds were the 2012-2013 Resident Wind Quintet with SoundExchange, a professional ensemble that strives to bring classical music to non-traditional venues throughout the Rochester area. As part of this residency, the Midic Winds collaborated with the contemporary dance ensemble BioDance. In order to expand their repertoire, the group performs orchestral pieces arranged for wind quintet by their horn player, Russell Rybicki, and commissions new works from Eastman composers. 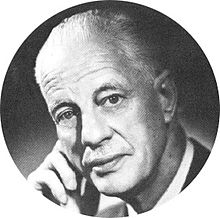 About the Concerto Grosso for Wind Quintet and Wind Orchestra:

Robert Russell Bennett is remembered today as an orchestrator for Broadway musicals, including Show Boat, Of Thee I Sing, Annie Get Your Gun, South Pacific, The King and I, My Fair Lady, The Sound of Music, and Camelot. He worked particularly closely with Jerome Kern, Richard Rodgers, and George Gershwin. Bennett was also a composer and arranger for orchestra and wind ensemble. He was a pupil of Nadia Boulanger, a revered French composer who tutored some of the best American composers of the 20th century, including Aaron Copland, Elliott Carter, and Philip Glass.

The Concerto Grosso is similar in style to Bennett’s other wind ensemble compositions, most notably the Suite of Old American Dances, yet explores more non-traditional and dissonant harmonies than the suite. Bennett’s play on the relationship between sprightly Americana and the darker textures of woodwind and brass is an study in stark contrast. The Concerto Grosso for Wind Quintet and Wind Orchestra was commissioned by the American Wind Symphony Orchestra. The form of the piece is based on the Italian Baroque Concerto Grosso from the Baroque period, in which a small group (in this case, the wind quintet) performs alongside a larger ensemble.

For more information, visit the official website of The Eastman Wind Ensemble