A “quintense” afternoon of chamber music at the George Eastman Museum 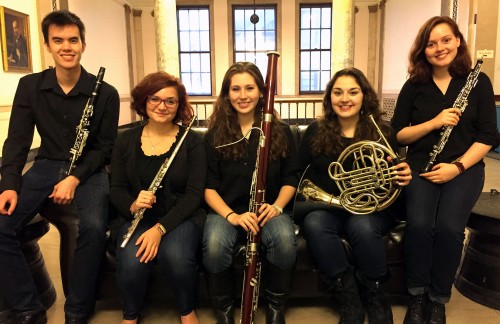 On Sunday, October 18 at 3 p.m., Quintensity, a woodwind quintet of Eastman undergraduate students, will be performing in the Conservatory of the Eastman Museum as part of the museum’s Performance Plus live music series, a collaboration with the Eastman School of Music.

The Eastman Museum’s Performance Plus Series features hour-long concerts and recitals by Eastman undergraduate and graduate ensembles, hosted by a PhD Musicology student who offers commentary on the pieces on the program. These performances are typically held on the third Sunday of each month. Gabrielle Cornish will be hosting Quintensity’s performance on Sunday. Upcoming this semester are Performance Plus concerts on November 15, with Megan Stiegerwald hosting and flute-and-guitar Duo Vela (Maria Nistico and Daniel Nistico) performing , and on December 20, a concert to be announced, hosted by Eric Lubarsky.