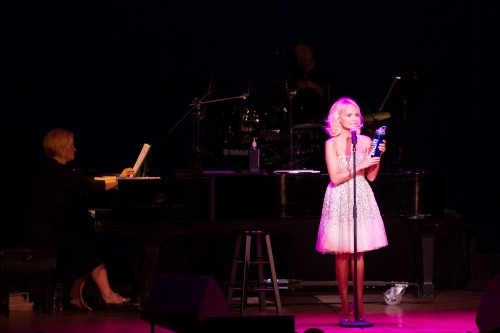 Kristin Chenoweth has a vast and varied resume. She won a Tony Award for her performance as Sally Brown in You’re a Good Man, Charlie Brown on Broadway. In 2003, she received acclaim for her performance as the first Glinda in the musical Wicked , and another Tony nomination. Her television roles include Annabeth Schott in NBC’s The West Wing and Olive Snook on the ABC comedy Pushing Daisies, for which she won an Emmy award. She has guest-starred on many shows, including Sesame Street and Glee, and has starred in numerous films.

For Meliora Weekend Eastman had the wonderful opportunity to host this legend in the music industry. On Friday afternoon, October 9, a few hours before a sold-out concert in Kodak Hall, she treated the Eastman community to a brief talk about her life and her philosophies on music, and then took questions from the audience.

She mentioned the various roles you must play when on stage and singing. “While you must have the chops, I believe the most important part of being on stage is the acting; I’ve always been an actor … don’t you think Mozart, when he heard the great singers of his time, would have loved an actor?” What she meant is that after you develop your technique, you must convince the audience that you are the person you are portraying — that is what sets great singing actors apart from competent singers.

She believes her proudest moment was when she took the stage as a solo artist in Carnegie Hall, and that from that time she has never stopped trying to grow and develop as an artist. She enjoys continually getting better, and continually discovering new things about her voice.

She shared a story about a part that required a tall girl and a high C. She had the high C, but she is less than five feet high. She went into the audition anyway, and sang the heck out of the high C. Eventually they changed the part because she sounded so great — she won the role despite the obvious obstacle.

When asked how she prepares for a role, she simply replied, “I go to the park and watch people.” 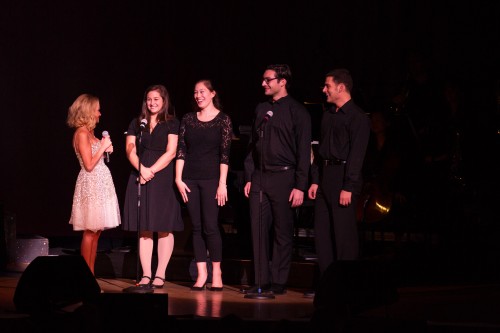 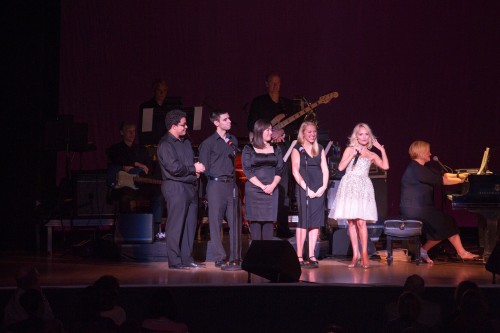 I talked with Nicole Beauregard, a senior vocal student who had the opportunity, along with seven other Eastman voice majors, to sing with Ms. Chenoweth on stage during her Friday night concert:

Ms. Chenoweth was incredibly friendly and truly interested in learning who we were as individuals. She wanted us to feel as if we were an important part of the concert. And when she sang, she really sang with us. She got us to feel the music as passionately as she does, and made sure that we knew that she was as honored to work with us as we were honored to work with her.

The 2015-2016 school year marks the 90th anniversary for SAI’s Sigma Theta Chapter at the Eastman School of Music. On Friday afternoon, this music sorority inducted Kristin Chenoweth as an honorary member. I talked to one sister of the SAI chapter. Andrea McGaugh, who took part in the induction ceremony:

To say the sisters were excited to induct Chenoweth as an honorary member is an extreme understatement. Kristin embodies the very values that Sigma Alpha Iota stands for. During her visit she showed us what it’s like to live a meaningful life. Her joyful spirit is contagious and her humble appreciation for whatever life brings is inspiring. Although the ceremony was short, the memory of the event will be cherished for a long time.

Thanks to Kristin Chenoweth for joining us on Meliora Weekend and giving us a brief insight into her world.