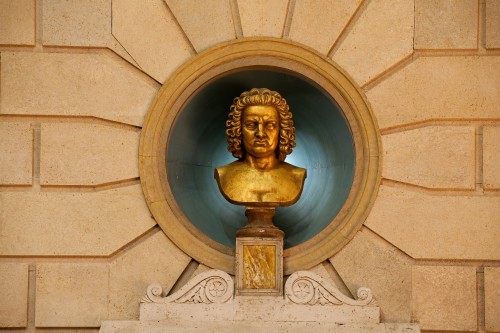 BWV 70, conducted this weekend by Hana J. Cai (MM ’17), was originally composed in Weimar for the second Sunday of Advent in 1716 and expanded seven years later for the 26th Sunday after Trinity in 1723 in Leipzig. The cantata is in two parts of 7 and 4 movements and is scored for four soloists, a four-part choir, trumpet, oboe, bassoon, two violins, two violas and basso continuo. The soloists for this weekend’s performance are soprano Paige Kiefner, mezzo-soprano Sun-Ly Pierce, tenor Nate McEwen and baritone Isaac Assor.

David Chin (MM ’12, DMA ’18) will conduct BWV 75, first performed in 1723 for the first Sunday after Trinity. This church cantata is the first of a project in which Bach began composing a cantata for every Sunday and holiday of the liturgical year also marking the start of his post of Thomaskantor in Leipzig. The cantata is scored for four vocal soloists, four-part choir, trumpet, two oboes, oboe d’amore, two violins, two violas, and basso continuo including bassoon. Soprano Liliana Buickians, mezzo-soprano Caroline Nielson, tenor Pablo Bustos and bass Cody Muller will be singing the solo parts.

David Chin describes this moving and rarely-heard music: “Unlike many musicians of his time, Bach never traveled to outside of his own country, but this does not limit his profound understanding of God and humanity. His compositions reflect his immeasurable knowledge not only as a composer, but more so as a theologian and visionary. Bach composed hundreds of cantatas and about 200 of them survived to date. Like any other of his major vocal works such as the St. Matthew Passion, St. John Passion, B minor Mass, or the Christmas Oratorio, the cantatas are often written in a very virtuosic way. The instruments and voices are equally distributed throughout the entire work, and each of them is featured in a soloistic manner. Each movement has its own character, sentiment, and significance where the texts are vividly and meaningfully delivered through music.

“The idea of orchestration as a compositional device in vocal works is often thought to appear later in the 18th century, such as in Haydn’s oratorios and Mozart’s operas, but Bach’s cantatas show that he had very clear and independent ideas about orchestration, and that he writes them with great imagination, specific purposes, and variety of colors. His music is extremely expressive and full of surprises.”