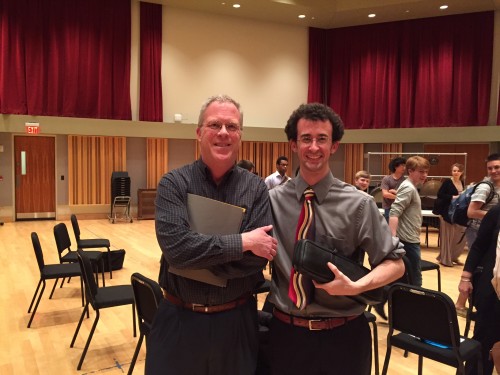 John Hunter and Zach Sheets after the first Tal Perkes Competition in April 2015.

This spring, one Eastman alumnus remembered another by supporting a current student. A flute competition, open to all Eastman graduate and undergraduate flute students, was held to honor the memory of Eastman flutist Tallon Perkes (BM ’84). Tal’s friends and family established this prize and competition to inspire the next generation of Eastman flute players. John Hunter (BM ’84, MM ’98) spearheaded a drive to fund this award in Tal’s name, to be awarded to the prizewinner. John encourages all classmates to add to the fund, so that the yearly dividend-driven award fund can continue to grow.
After his graduation in 1984, Tal Perkes’s music career took him all over the world. He performed in major orchestras and gave solo appearances in the United States, Europe, Japan, Korea, Peru, and Baja California.
“The level of professionalism displayed by the nine flutists in the competition was inspiring and impressive,” said John Hunter. “It’s a testimony to the ongoing strength of the Eastman flute studio.”
On April 18, the jury (Joanna Bassett MM ‘86, Doug Prosser BM ’85, Sophia Kim MM ‘98, and John Hunter) awarded the first Tallon Perkes Flute Prize to Zach Sheets, a double Master’s degree major in flute and in composition; as part of his competition, he played a solo of his own. We asked Zach about his experience:

What pieces did you play in your time slot? I understand you wrote one of the pieces – could you give the name and briefly describe it?

I played the exposition of Mozart’s Concerto in G major, 4-5 standard orchestral excerpts (the Scherzo from A Midsummer Night’s Dream, Beethoven’s Leonore Overture, etc.), and a piece of my own for solo flute, called that colors the stone. I wrote it in the summer/fall of 2013—it’s the first and only piece I’ve written for solo flute, actually. I was thinking about moss as it grows on rocks; something very gentle that blooms from a very cold, hard frame, and through its life-cycle leaves beautiful colors and traces on the terrain it lives in.

It was special, of course, to be playing in memory of a former student of Ms. Boyd’s and honoring his life. The other unique stipulation of this competition was that it all had to be from memory. Flute is about the only instrument that you don’t hold at least a little bit in front of you, so, as strange as it sounds, it’s weird not to know what to look at! I didn’t want to stare down the judges but I also didn’t want to gaze off into space.

Can you give me a little background about yourself?

I was born and raised in Norwich, Vermont, as the son of a nurse and an antique dealer. I did my undergraduate degree in music and French literature at Harvard University, where I studied with Cynthia Meyers (of the Boston Symphony) and Ransom Wilson (Yale School of Music). I began the flute at age 10, after deciding that the clarinet looked harder because it had holes in the keys. I’m also a composer; I try to wear both hats as frequently and evenly as possible.

What are you doing this summer? What are your ambitions after graduating from Eastman?

Earlier this summer I was performing at the Spoleto Festival USA, as a soloist on the contemporary music series and as a member of the orchestra. Right now I’m in Paris, France, at the ManiFest Academy at IRCAM, studying composition and working on a new piece with the Ensemble InterContemporain. After Eastman my default plan is to continue working and freelancing in New England—I’m the principal flute in the Cape Cod Symphony (yes, it’s a long commute from Rochester, and no, it’s not every week!) and I play often in the symphonies in Albany, New York, and Portland, Maine. I may apply for a little bit more school as a composer or as a contemporary music specialist, and may try to go abroad for a while, though!