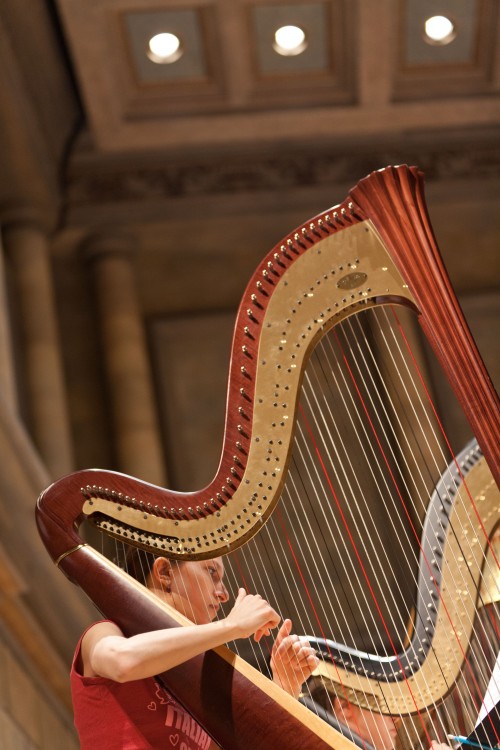 How long have you been teaching in Rochester? How have things changed in terms of pedagogy, repertoire, and instruments through these years?

I came to Eastman to work on my DMA in Harp, which I received in 1992. I became the Harp Instructor for the Eastman Community Music School in 1992, and am now Senior Instructor in Harp at ECMS. I give individual instruction, and conduct the Harp Choir (for intermediate harpists) and the Advanced Harp Choir, plus conducting the ECMS Harp Workshop each summer. There are more varieties in harps, and the repertoire has expanded, which is a change for the better. The harder change with which to deal is the increasing demand on the students from after-school activities such as sports. Lessons are cancelled because of conflicts and are not easy to make up.

You have been actively involved with the Historical Harp Society. What fascinates you about historical harps? What do young harpists need to know about them?

Yes, I am on the Board of Directors of the Historical Harp Society. My editions of historical harp repertoire are published by the Historical Harp Society.
I grew up in State College, Pennsylvania, where my father was an associate professor of music at Penn State University. One of his hobbies was restoring antiques, and our home was filled with his projects, including the 1881 Steinway grand piano on which I practiced every day for many years. One day he brought home an “old harp” which I called “Old Toothless” because it had no strings. No one knew what to do with it, and it remained in our family and was decorated at Christmas with ribbons and hanging balls. It took a while, but c. 2010, after studying many, many years, I had it restored. It is an c. 1830 Erat concert harp, built in England by I. Erat, whose patent was given in 1813. I am now giving concerts on this lovely harp, which has a distinctive sound of its own.
We in Rochester, New York are also very fortunate to have Paul Knoke living here. Paul is a former student of mine, but is now a dear friend and colleague. He is one of the world’s foremost authorities on historical pedal harps. He built an 18th Century Naderman harp from the original blueprints, only to have this harp lost in a truck accident fire after a HHS Meeting in Boston. He then reassembled two Cousineau harps, one built by the father c. 1775, and another by the son, c. 1785. All my students at ECMS and the Harp Workshop have had opportunities to see and to play on these harps.
Students need to be made aware of the difference in sound, techniques, and repertoire of historical instruments. They also need to know about “historically informed performance.” What is the correct way to play ornaments? This is an important question for the student to ask and about which to be informed.

What advice do you give parents when their child expresses the wish to play the harp?

I am always encouraging to the parents. The greatest problem is obtaining a harp on which to practice. No local music stores carry harps, and harps must be purchased or rented from companies in large cities such as Chicago or Los Angeles.

You’ve been teaching the ECMS Harp Workshop in the summer for several years. What can students expect to accomplish in five days?

Well, we have the music we are planning to work on for the workshop in advance. Usually the student will work on these pieces with his or her own teacher. Then each student will play a solo piece, which he or she has worked on throughout the year. What we do in five days is work on the ensemble playing, watching a conductor, and performing each day a solo in front of the others. Also we have experiences visiting Sibley Music Library to see the historical harp collections, one of which is my “Gullo Harp Collection” of 18th Century music, and of playing on Paul Knoke’s historical harps.
I have been teaching the ECMS Harp Workshop since 1994. In addition to solos, we perform medleys from musical productions, and medleys of songs with similar themes, such as Irish songs. This 2015 Harp Workshop, which is from July 27 to 31, 2015, with a Participant’s Recital in Hatch Hall from noon to 1:30 p.m. on Friday, July 31, 2015, will feature a medley from My Fair Lady and a medley of “rainbow songs” such as “Somewhere Over the Rainbow.”
Previous medleys from musicals have included: The Sound of Music, Oklahoma!, South Pacific, Beauty and the Beast, Brigadoon, Finian’s Rainbow, Phantom of the Opera, West Side Story, and Les Misérables.