“Optimism and dedication”: An Interview with Kent Tritle 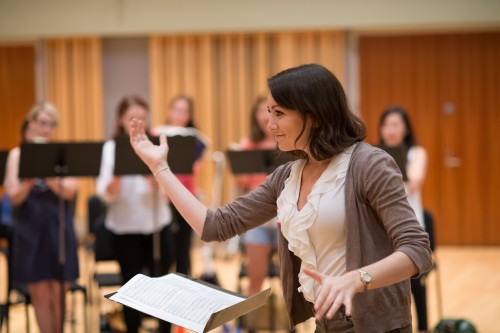 A student in the 2014 Choral Conducting Institute.

Called by the Huffington Post “one of the most prominent conductors of choral music today,” Kent Tritle will be an honored guest at Eastman this July as part of William Weinert’s Advanced Choral Conducting institute. Summer@Eastman director Sylvie Beaudette interviewed Mr. Tritle for our blog.

Your multi-faceted career involves performing both as conductor and as organist, teaching at the Manhattan School of Music and The Juilliard School, and so on. Do you have an over-arching philosophy that you apply to everything you do?

My over-arching philosophy would have two parts to it. First, people are intrinsically good and intrinsically talented. I believe that EVERYONE has a talent; the sad factor in our day is that many people never discover their talent. So working with people who are focused on music is the greatest joy, because for one they have discovered what floats their boat: they have discovered their calling.
The second part of my philosophy would have to do with the art we immerse ourselves in. It is our duty, our calling, to bring to life the intentions of composers living and dead. To do that, our ego must be out of the way, and as performers of an instrument or as conductors we must become channels between the composers (living and dead) and the musicians or audience in front of us. That means working hard to learn and know the music before us, and it also means using every facet of our intellect and imagination, yet directing that to the composer’s intentions. That’s a long-winded answer to your question! Boiled down, the two most important points are 1)optimism and 2) dedication to our art and responsibility as artists.

Mozart’s Requiem will be at the core of this summer’s Advanced Choral Conducting institute at Eastman. Why did you choose this work in particular?

I’ve chosen Mozart’s Requiem in part because it has not yet been explored in these sessions, and it is chock full of issues for the budding conductor. Tempo transitions, conducting adagio, performance practice issues: they’re all there. This was an extremely important work in my formation; the first time I conducted it I was in front of the Juilliard Orchestra and a professional chorus. Later I would conduct it for a major 9/11 memorial. I prepared The Dessoff Choirs to sing it at Lincoln Center’s Mostly Mozart Festival and I’ve conducted the Oratorio Society of New York in a performance at Carnegie Hall. Overall I have probably conducted this work about a dozen times or more, and I’m excited to share my experience with students who may not yet have had such opportunities.

In your teaching, you work with very talented upcoming conductors. What are the most common mistakes that young conductors make?

The most significant mistake people make is getting into conducting for the WRONG reason. I mentioned before the need to get the ego out of the way; many people are drawn to conducting for the right reasons, and by that, I mean they are natural facilitators. They know how to get the best out of the musicians in front of them, and they work in positive ways to achieve that. They have worked hard to acquire the vast array of skills and knowledge to support their work on the podium. They treat people with respect, and ultimately understand that music is most alive and vital when we connect with the musicians in front of us. Those who conduct for the wrong reasons will be interested in dominating people, showing off with flamboyant gestures not so connected with the music at hand; they will conduct AT musicians rather than WITH them. They will be ahead of the beat, frequently conducting as though they were conducting a recording. I’ll be honest. This is a problem on a grand scale, and there are a number of conductors out there with careers who fall into the second category. Personally, I have no patience for this. One of the reasons I have enjoyed my work with Alan Gilbert at the New York Philharmonic is his understanding of this. He is a true collaborator, and yet he has a core of iron. He knows what he wants, and is always deriving his interpretation from the composer. He creates pathways for extraordinary music making.

As an organist, you are about to travel with the New York Philharmonic on its European tour. Any particular instrument(s) you are looking forward to performing on?

We finish in Cologne at the Philharmonie where they have a wonderful instrument by Klais. I’m looking forward to the whole tour, of course, and am happy that the Phil has allowed me to return to the US to run a Carmina Burana rehearsal in between European performances. The day I return from the Cologne performance I go from a noon landing at Newark Airport to a 3 p.m. orchestra and tutti rehearsal! Life is beautiful.

We look forward to welcoming you at Eastman. See you in July!

Thank you so much! I’m delighted to be coming.