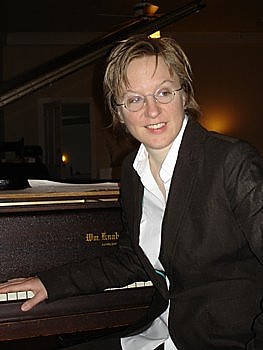 On Friday, April 17 at 3 p.m. in Eastman’s Ray Wright Room, Chris Lastovicka will reflect on her life as a composer and as a woman who is a member of the LBGT community. This conversation is supported by the Eastman Diversity Initiative and the Susan B. Anthony Institute for Gender and Women’s Studies.

The talk, entitled A Composer, Her Identity and Voice: a Frank Conversation with Chris Lastovicka, is a wonderful opportunity to speak with a successful musician and to reflect on our changing social climate. As many around the world are faced with discriminatory attitudes regarding their sexual and racial identities, it is a time to come together to explore these issues and confront them head on.

In addition to hearing Chris Lastovicka speak, you can hear her music that evening, when the Eastman Women’s Chorus performs her Ryan Songs under Philip Silvey. The choral concert takes place at 8 p.m. in Kilbourn Hall.