Move Over Gabriel, There’s a New Sheriff in Town … the Legendary Clark Terry 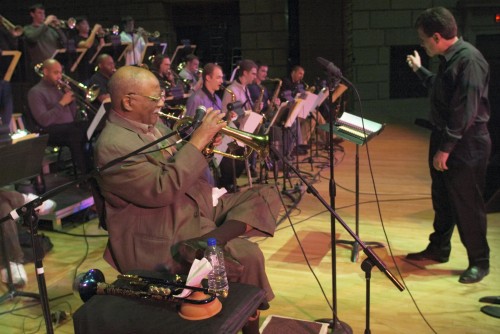 In February 2005, Clark Terry performed with the Eastman Jazz Ensemble under Bill Dobbins.

CT was a gem. Clark Terry had a resume that read like a history of jazz. He played with some of the most notable performers in America, including Count Basie and Duke Ellington’s famous bands. He recorded albums with Ella Fitzgerald, Bob Brookmeyer, Oscar Peterson, Thelonious Monk, and even the London Symphony, among others, and inspired so many amazing musicians who came after him. I would submit that most of the greatest jazz trumpet players alive today considered him an influence in their journey, and until his death on Saturday, considered him the greatest living disciple and carrier of the tradition passed down to him from Louis Armstrong. Clark Terry received more than 250 awards, a knighthood in Germany, and 16 honorary doctorates, but you would never know it from talking with him.

I never had as personal a relationship with the master as I would have liked, but I did get to meet him a few times from 2005 to2009. The reason I say you would never know what he did from talking to him was because he never flaunted it. With him, it was all about the music, about family, about the history. For someone so accomplished, he was the most humble person I’ve ever met.

I was only in sixth grade when I first saw him. I remember him going up on stage and being asked by a member of the audience, “What did you enjoy most about your many years of performing?” He had a good reply, but right before he began to play, he praised the great musicians backing him up, and promptly stated, “The golden years suck!” He was always telling jokes and making people laugh, while making a genuine connection with every audience.

After that experience, I looked up to Clark Terry as a god. The next year, I got the opportunity to study with one of his students who was just as generous as Clark and I could finally trace my lineage in the tradition: Louis to Clark to my teacher to me, and so CT became a kind of grandfather. Every opportunity I could get, I tried to hear him play. I devoured his records, but more than anything I paid attention to his demeanor with others. In a history fraught with problems and questionable, albeit talented, jazz figures Clark stood out as a simple reminder that the golden rule still applies on the band stand. More than anything, you must respect others, and in doing so, help educate them.

CT became the first African American to become a regular member in a band on a major television network, and despite navigating the incredibly murky waters of racial tension in 20th-century America, he came out through the other side on top, more loved and respected than ever.

Since sixth grade he was my favorite trumpet player, and probably the biggest inspiration in becoming a player myself. I will miss his smile on stage and his distinct playing, but I am incredibly happy it will live on in the lives he touched and the students he taught. I thank you very kindly, CT, for teaching us so much more than how to swing. 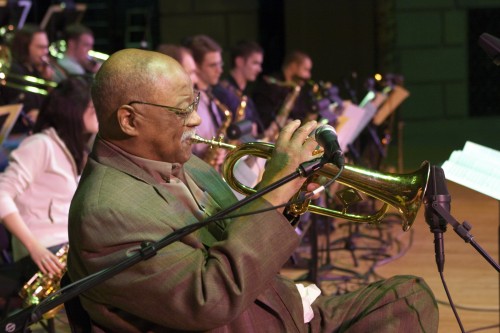