A Wind Ensemble Concert and a Fennell Celebration 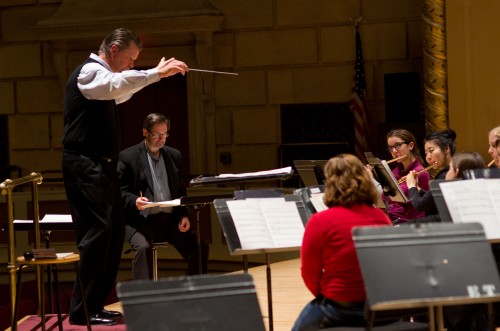 Tomorrow night at 8 p.m. in Kodak Hall, I have the pleasure of playing again with the country’s favorite wind ensemble. The program will be opened by Eastman’s Harmonie—a chamber ensemble of wind players — who will be playing the Serenade No. 11 in E-flat Major by Mozart. Then come two modern works: Funeral Music for Queen Mary by Steven Stucky, and Vientos y Tangos by Michael Gandolfi. The concert will end with “The Alcotts” from Charles Ives’s Piano Sonata No. 2, adapted for band, and finally, the most unpredictable march ever written: Country Band March, also by Ives. The guest conductor is Frank Battisti, conductor emeritus of the New England Conservatory of Music Wind Ensemble.

This year marks special significance for this esteemed ensemble. It is the 100th anniversary of the birth of its founder, Frederick Fennell. So, in keeping with the celebration, both tonight and Saturday Dr. Mark Scatterday and the Wind Ensemble will host conducting master classes with Eastman Harmonie, Eastman Wind Orchestra, and Eastman Wind Ensemble in Eastman East Wing 415. Today there are various events taking place from noon till 7 p.m., but the actual master classes will take place starting at 7 tonight. On Saturday, the master class goes from 9:30 a.m. till 5:30 p.m., also in Eastman East Wing 415.

It is an honor to play in the wind ensemble under the baton of one of Frederick Fennell’s successors.This is a fitting tribute to a man who devoted his life to the education of conductors and to the development of the musical medium he created: the wind ensemble.