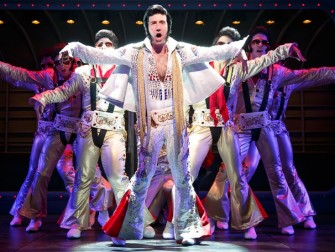 Congratulations to composer-lyricist Jason Robert Brown (x ’91), whose musical Honeymoon in Vegas opened last night on Broadway and is receiving very good reviews, including one in the New York Times. Jason has won two Tony Awards for his scores for Parade and The Bridges of Madison County, and may have a third on the way for his jazzy, Vegas-meets-Broadway-meets Elvis impersonators score.

In related Eastman-on-Broadway news, today is the birthday of the legendary musical star Ethel Merman. She’s known for belting out great scores by Gershwin, Cole Porter, and Irving Berlin – and here she is singing “Tomorrow” from Annie, by Eastman alumnus Charles Strouse (BM ’47).