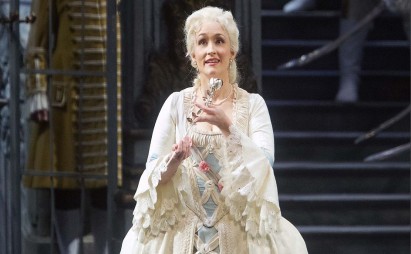 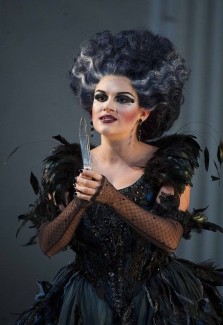 Erin Morley as Sophie in Strauss’s Der Rosenkavalier (above) at the Met, and Kathryn Lewek as Queen of the Night in Mozart’s Magic Flute at the English National Opera.

Every day at Eastman, we students hope that all our hard work will pay off in the future. We attend classes, practice our instruments, and receive invaluable instruction from our professors, but it is especially satisfying when we hear that alumni of our esteemed school “make it.”

Last month, sopranos Erin Morley (BM ‘02) and Kathryn Lewek (BM ‘06, MM ’08) made their debuts with the Vienna State Opera last month, on December 20 and 25 respectively. Erin’s last-minute performance of Sophie in Der Rosenkavalier at the Metropolitan Opera was hailed as a major success. Erin has also debuted at Opera de Lille, Opera de Dijon, and Munich’s Bavarian State Opera, and this season includes company debuts at the Opera National de Paris and the Palm Beach Opera, as well as a return to the New York Philharmonic to sing La Vierge in Honegger’s Jeanne d’Arc au Bucher with Alan Gilbert and Marion Cotillard. Katie Lewek was a double prize winner at the 2013 Operalia World Opera Competition. In her signature role, the Queen of the Night in Mozart’s Magic Flute, Katie has garnered international critical acclaim with Deutsche Oper Berlin, Bregenzer Festspiele, the Metropolitan Opera, Washington National Opera, Festival d’Aix-en-Provence, and English National Opera.

Sometimes in the hustle and bustle of a new semester we Eastman students can lose focus of what brought us here in the first place. Both Erin and Katie are wonderful examples to me and to many current Eastman students that all our hard work will be rewarded. Congratulations to these two rising stars!