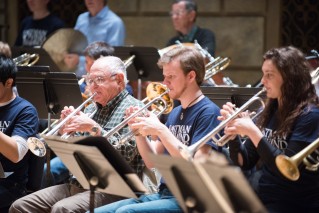 The Friday afternoon session started with EWE director Mark Scatterday speaking about Fennell’s influence on him as a director and an educator. Longtime EWE director and conductor emeritus Donald Hunsberger gave a rousing depiction of his time with Fennell as a member of the first wind ensemble, and how Fennell influenced his entire career. He explained, “It is an impossible task to explain this great man in a mere few minutes—Eastman would not be what it is today without Fred Fennell.”

After these introductions, the wind ensemble played selections from some of the earliest and greatest band repertoire in existence: Sousa’s Hands Across the Sea and El Capitan; Hanson’s Chorale and Alleluia; Holst’s Suite in E-flat; and Grainger’s Irish Tune and Shepherd’s Hey.

Throughout the celebration, Professors Scatterday and Hunsberger opened the mic up to the alumni, who spoke about meaningful experiences they had with Fennell: their first time playing with Fennell and the trepidation they felt, going on tours with him, and how he was always in a state of jocularity, untroubled by the day-to-day monotony inherent in their young careers. Other alumni explained how much of an influence he was on their musical careers, and how without him they would never have continued playing.

On Sunday morning, October 19, wind ensemble members, conductors, and alumni alike met in Kodak Hall at Eastman Theatre to play through together some of the standards for band and wind ensemble. It was a wonderful time, with alumni reclaiming their place on the stage of Eastman Theater with Dr. Hunsberger at the helm; Professor Scatterday even brought out his trombone and sat in the back row! All in all, it was a weekend of commemoration in honor of our inspiring former musical director: Fred Fennell.

Frederick Fennell (1914-2004) began his career as a conductor almost as soon as he arrived at the University of Rochester’s Eastman School of Music in the fall of 1933 when, to his amazement, he discovered that no wind band of any kind existed at either campus. He then devoted a considerable portion of the next 30 years of his life to the amicable amelioration of this condition, organizing and conducting outdoor and indoor groups, which led him to establish the Eastman Wind Ensemble in 1952. He conducted the group for its first decade, and spread wide its simple message through the Eastman/Mercury Records American music recording project at the invitation of composer and Eastman Director Howard Hanson. The Wind Ensemble’s original 23 LPs, now in crossover to CDs, caused reconsideration of the wind medium as a serious artistic pursuit. 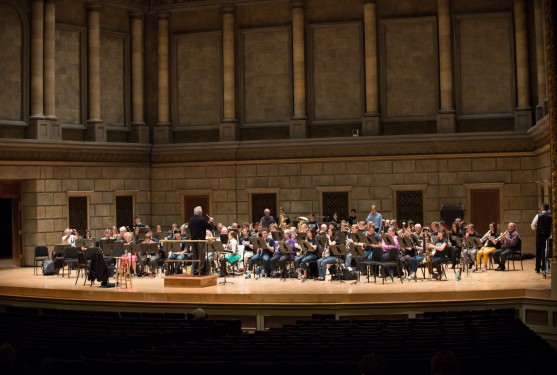