For Eastman Weekend 2014, our next few Eastman blog posts will celebrate news of notable alumni. 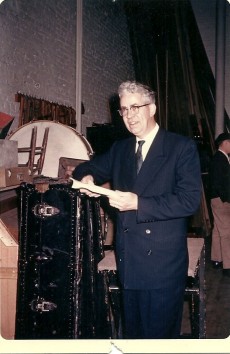 Adah Toland Jones (BM ’71, MM ’72). Professor of flute at Texas State University, contacted us after the recent death of her father, P. Litchard “Litch” Toland (BM ’39). “Litch,” who died on December 29, 2013 at the age of 96 in Naples, Florida, was not only an Eastman alumnus, but a longtime Eastman staff member. “Having attended Eastman myself from 1967 to 1972, as well as studying in the Preparatory Department (as did my brother), Eastman roots run deep in our family,” says Adah.

“As Ensemble Librarian, ‘Litch’ served all the school ensembles, as well as the Rochester Philharmonic Orchestra, from 1946 until 1969. He then became the director of Eastman’s Placement Bureau and Alumni Relations, a position he held until his retirement in 1979. As Ensemble Librarian, he also taught courses in calligraphy and copyright law, authored a handbook on musical notation, and was manager of Eastman School of Music publications.

“At Eastman, he came in contact with numerous conductors and performers, a list including Stravinsky, Copland, Leinsdorf, Rachmaninoff, Horowitz, Kreisler, Menuhin, Enescu, Rubinstein, Iturbi, Bernstein, Flagstad, Segovia, Salzedo, Fonteyn, Nureyev, and of course all of the prestigious Eastman conductors.

“After my father’s death, I received many emails from Eastman graduates with whom I have maintained ties over the years.

“From Leone Buyse (BM ’68), Flute Professor at Rice University: ‘I have such great memories of Litch Toland’s positive presence at Eastman: his smiling face, his helpful attitude toward everyone, his professionalism in his work.’

“Patricia George (BM ’64, MM ‘65), Editor of Flute Talk magazine, recalls, ‘Litch had the nicest things to say about my playing, even when I was a lowly freshman. During the Philharmonia tour of Europe and the Near East in 1961-62, he offered me advice about music and life. By the time I was a junior or senior, he asked me to teach his daughter Adah the flute. Litch had an extensive knowledge of the music publishing business, especially rentals, score publication, and physical printing. He was generous in sharing this information with my husband, composer Thom Ritter George (BM ’64, MM ’68).  One day Ritter asked Litch why he was taking the time to do this, and Litch said, ‘Sometimes you just like some people.’

“’Litch was a highly responsible person.  If he said he would do something, he did it. If you made a deal with him, the deal always came through. Litch’s ethics as a professional musician have strongly influenced us both through the years. He is greatly missed.’

“From Michael Webster (BM ’66, MM ’67, DMA ’75), Professor of Music at Rice University: ‘I remember Litch so well – tall, quiet, efficient, kind. I was RPO assistant librarian for one year, and although I didn’t work for Litch, I saw him regularly and found him to be 100% friendly and helpful, always an encouraging word and never a bad word to say about anyone.’

Litchard Toland was predeceased by his first wife, Caroline, and is survived by his second wife, Beatrice, daughters Ruth and Adah, son Ray, grandson Erik, and great granddaughter Meakah. The family welcomes reminiscences from friends and former graduates. 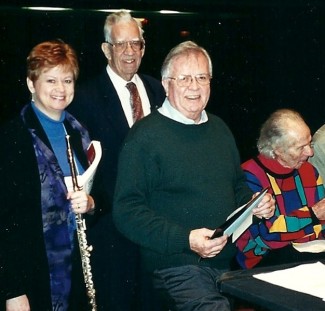 From left to right: Adah Toland Jones, Litchard Toland, Donald Hunsberger, and Frederick Fennell at the 50th anniversary of the Eastman Wind Ensemble, 2002