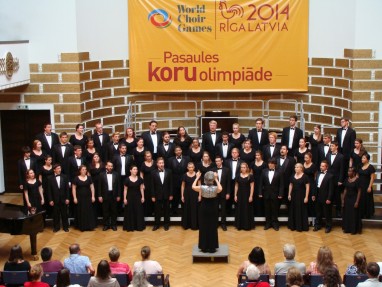 Photographs provided by Peggy Dettwiler: “This is the choir in the Mixed Youth Choir Category at the World Choir Games in Riga, where they received a Gold Medal and third place among 23 choirs from 14 countries.”

Peggy Dettwiler (DMA ’91), director of choral activities at Pennsylvania’s Mansfield University, brought her Mansfield College Concert Choir to the 2014 World Choir Games in Riga Latvia, and came home with gold medals in the Mixed Youth Choir, spiritual music, and accompanied sacred music categories. The wins were the culmination of a 14-day European concert tour this summer that took the group to Lubeck, Berlin, Warsaw, and Vilnius before arriving at the WCG in July.

“The Concert Choir achieved their personal and collective best performances,” Peggy recalls. “Our goal was to sing as well as we could imagine and communicate the message of each of the twelve selections we had prepared for the three categories in which we participated.  And it seems that most of the members of the seven-person international jury for each category were touched and recognized our sincere efforts.  I am so proud of the way our students represented Mansfield University, the state of Pennsylvania, and the United States of America!”

Peggy was not the only Eastman choral conducting alumnus whose ensemble was lauded at the 2014 World Choir Games. Brian Kittridge with the choir of the University of Alabama, Birmingham won silver medals in accompanied sacred music and spiritual music and a gold medal for Mixed Youth Choir, and Felix Shuen won gold medals for Young Male Choir and Mixed Youth Choir for choirs from the Diocesan Boys School in Hong Kong. 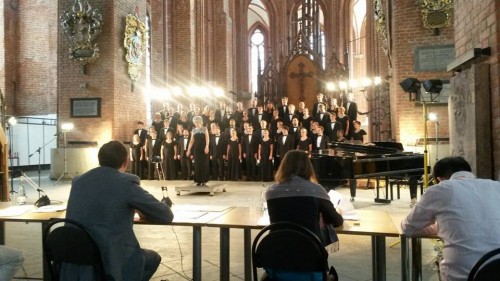 “And here we are standing before the judges in the Spiritual Category where we received a Gold Medal and Second Prize among 16 choirs from eight countries.”