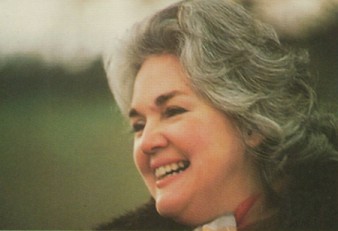 One of the legendary teachers and performers in Eastman’s history, the great American mezzo-soprano Jan DeGaetani, was born on this day in 1933. When she came to Eastman in 1975, DeGaetani was highly regarded as an interpreter of contemporary music, including masterworks by Schoenberg, Varese, Carter, and Crumb. By the time of her death in 1989 of leukemia, she had amassed a discography spanning Medieval and Renaissance songs, Cole Porter show tunes, and classic German and French songs, as well as major works by such Eastman composers as Warren Benson and Samuel Adler. Jan DeGaetani also taught several generations of Eastman voice students who have gone on to fame in their own right. (Her husband, the oboist Philip West, also taught at Eastman for many years — and took the photograph of his wife shown here.)

You can read a brief biography of Jan DeGaetani here, and also listen to her artistry in songs by Schubert and Ives, both with her long-time collaborator Gilbert Kalish at the piano.