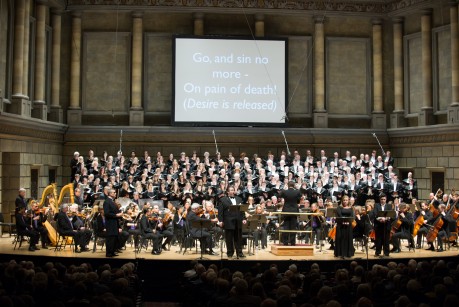 Howard Hanson’s Merry Mount is a challenging opera to bring off, but the Rochester Philharmonic Orchestra did just that last week (April 10 and 12) in its concert version, with help from Eastman forces including the Eastman Rochester Chorus, Eastman Chorale, and several soloists chosen from recent graduates and current students. Conductor Michael Christie of the Minnesota Opera led the whole crew, which filled the Kodak Hall stage. Next stop, Carnegie Hall: the same group will perform Merry Mount in Carnegie’s “Spring for Music” festival on May 7.