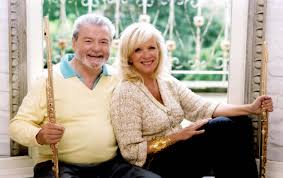 The day after St. Patrick’s Day is as good as any to remind readers that Sir James Galway, probably the world’s best-known flutist and one of its better-known Irishmen, is a guest at Eastman this week, along with his wife (and frequent musical partner) Lady Jeanne Galway (both are shown above). Sir James was an Eastman School of Music faculty member during the 1975-76 academic year, and he returned to Eastman in the 1980s to perform and record John Corigliano’s Pied Piper Fantasy (written for him in 1982) with David Effron and the Philharmonia for RCA. 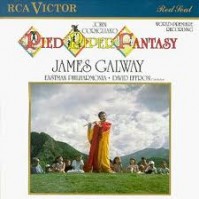 Tomorrow, March 19 at 7 p.m. in Kodak Hall, Sir James and Lady Jeanne will be guest performers for a taping of the popular public radio show From the Top, a showcase for young classical musicians.  Sir James and Lady Jeanne will perform with host Christopher O’Riley, and Sir James will play the third and fourth movements of Gounod’s Petite symphonie with an ensemble of young musicians including several Eastman students: June Kim, oboe (senior) Dominic Giardino, clarinet (sophomore and From the Top alum) Quinn Delaney, bassoon (senior and From the Top alum), Russell Rybicki (BM December ’13) and Nikolette LaBonte (freshman), horns. Also featured in this show is soprano and Eastman sophomore Emily Helenbrook, who sang on From the Top in 2012.