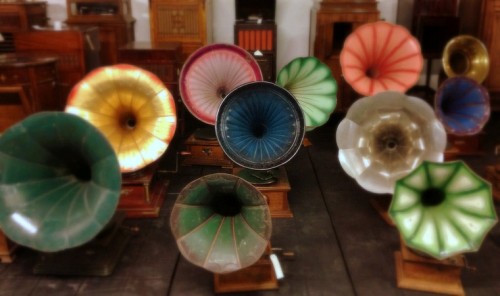 These 19th century phonographs in the Collection Charles Cros, at the Bibliothèque nationale de France in Paris, were photographed by Sarah Fuchs Sampson, a PhD student in musicology.

Beginning in 1891, anyone with a private telephone line in France could subscribe to the Théâtrophone — and listen to live performances of opera in the comfort of their home, Sarah Fuchs Sampson noted in a recent lecture at the Eastman School’s Sibley Library, that was noted in the University of Rochester’s Research Connections newsletter.

Fuchs Sampson, an Eastman PhD student in musicology and recipient of the Presser Music Award, spent three months last summer searching through 14 different archival collections and libraries in Paris to research how such emerging technologies as the gramophone, phonograph, and silent film “radically reshaped the practice, performance and consumption of opera” in fin-de-siècle France.

If it seems remarkable today that we can livestream the Met on our smartphones and tablets, imagine how exciting it must have been to do much the same with Parisian opera performances more than a century ago — before radio and television were invented and when phonograph recordings were still in their early days. The Théâtrophone must have seemed a marvelous invention indeed.

By making the opera accessible to a wider audience, Fuchs Sampson notes, the Théâtrophone, along with phonographs and gramophones, contributed to the emergence of a new kind of audience. These were true connoisseurs “who would listen with ears attuned to opera’s historical significance” — in contrast to the traditional elite audience that, as one French observer noted, seemed “more interested in itself than in the performance.”