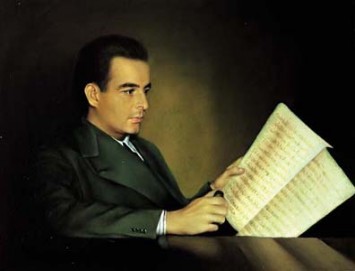 Sunday, March 9, is the 104th birthday of one of America’s most popular classical composers, Samuel Barber (1910-1981). His String Quartet, Op. 11, which contains his most famous piece, the “Adagio,” was recently recorded by Eastman’s quartet-in-residence, the Ying Quartet, along with music by longtime Eastman director Howard Hanson. You can hear David, Philip, and Janet Ying and Ayano Ninomiya perform and discuss the recording here. It also includes a performance of Barber’s Dover Beach by baritone Randall Scarlata (BM ’92).

Another early work of Samuel Barber’s, his Symphony No. 1, Op. 9, was recorded in the 1950s by Howard Hanson conducting the Eastman-Rochester Orchestra, in their famous series of Mercury recordings of American music. You can listen to their complete performance here and here.