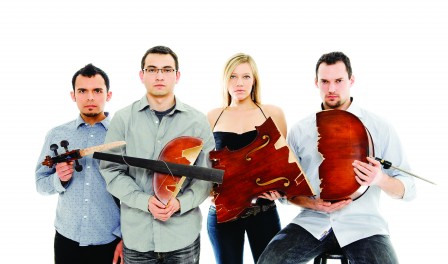 “Low strings” are in the spotlight this week at Eastman, performing old music and up-to-the-minute music. Eastman’s Viol Consort, which plays string instruments that are the Renaissance and Baroque forerunners of the viola, cello, and bass, performs a concert of 18th-century music on Thursday, January 16 at the Memorial Art Gallery, joined by the Italian Baroque Organ.

Music for viols tends to be dark-hued and contemplative; the music performed by the cellists in Break of Reality rocks, in what the group describes as “an intense style that is cinematic, subdued, and heavy all at once.” Besides the cellists, Break of Reality also includes a drummer. The group (shown above), which was formed at Eastman in 2003 and includes Eastman grads Patrick Laird and Ivan Trevino, returns to Kodak Hall for a concert on Friday, January 17. They’ll also give a career-oriented talk sponsored by Eastman’s Arts Leadership Program on Thursday, January 16.