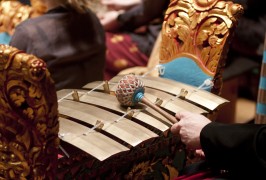 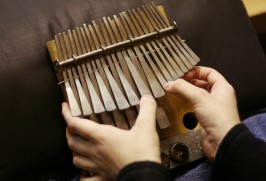 World music ensembles have been part of Eastman’s offerings since 1993, when the Balinese gamelan ensemble Lila Muni (Heavenly Sound) was formed. A gamelan (pictured on the top) is a communal percussion orchestra native to Bali, which often accompanies dancing or other performance. In 2004, Eastman started its own Zimbabwean mbira ensemble, Mbira dze Mugomo Guru. The mbira (pictured on the bottom) is a hand-held instrument played with the thumbs, which pluck metal keys attached to pieces of metal, shells, or bottle caps which create buzzing sounds. You can hear the intriguing sounds of both groups, along with the University of Rochester’s West African Drumming Ensemble,  in a sampler of world music  tomorrow, December 14, from 1:30 to 3 p.m. in Eastman’s Ray Wright Room (formerly Room 120), Admission is free.