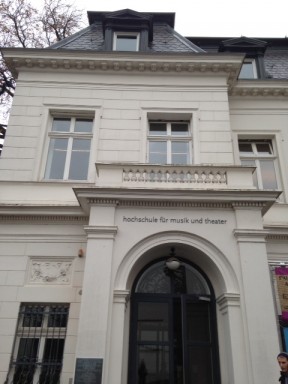 On Wednesday, I taught an improvisation class at the Hochschule für Musik und Theater in Hamburg to undergraduates and a few faculty. Many of the participants in this class didn’t have experience improvising, but before the class was over, we had improvised to the spiritual “Joshua,” “Mary Ann,” “Long, Long Ago,” and a Mozart canon, applying the techniques from Developing Musicianship through Improvisation.

Students were enthusiastic about the session and excited about developing their musicianship in this way; they particularly enjoyed the variety of styles. As a part of the session, I performed “Autumn Leaves” and “Softly as in a Morning Sunrise” on the piano. I also taught the students several pieces by ear, including a Bach chorale, and several American and German folk songs, selections that provided a deep wellspring of inspiration for creating and improvising.

At the end of class, my host’s 15-month-old son, Conrad, came into the room and started listening to us improvising on “Joshua.” He was standing at the door about 10 feet away from me and was so engaged. At one point, while I sat on the floor and continued to improvise by singing a melody to the harmonic progression of the song, Conrad began to intermittently sing the resting tone as a kind of musical “punctuation.” As we interacted, he moved closer and closer until he was right on top of me

The students were inspired by this interaction; it confirmed for them many of the things that we had addressed in class, such as the basic nature of music, the power of improvisation, and the importance of play. After a session of playing piano, singing, moving, and improvising with adults, it was terrific for all of us to have Conrad there.

After the class, two of the faculty and I went sightseeing in downtown Hamburg. I took many photos while enjoying the autumn colors and all of the sights in the city.

One of the faculty hosting me knew the organist at St. Jacobi Church in Hamburg, so we went to hear and see its organ—which, I was told, they are almost 100% certain J. S. Bach had played. We went up into the organ loft and met Rudolf Kelbler, organist at St. Jacobi, and one of his students. We had a wonderful time listening to the organ, chatting about improvisation, Bach, and music in general. After visiting the church, we went to lunch downtown and continued to see the sights. Hamburg is a beautiful city.