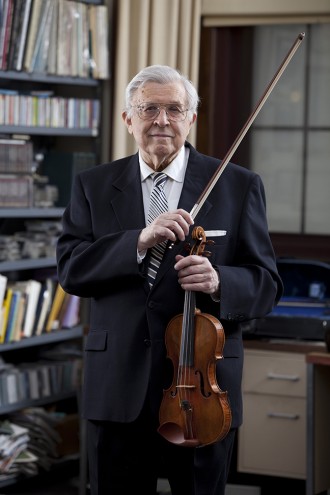 A faculty member at Eastman from 1967 to 2012, Zvi Zeitlin (1922-2012) was revered for decades as a violinist, pedagogue, chamber musician, and champion of contemporary music.

Born in Dubrovna, Belarus, Zvi Zeitlin was raised and educated in Israel. At age 11, he became the youngest scholarship student in the history of the Juilliard School, studying with Sascha Jacobsen, Louis Persinger, and Ivan Galamian. He served in the RAF (1943-46) and concertized for troops throughout the Middle East and Greece.

One of Zeitlin’s signature pieces was Arnold Schoenberg’s fiendishly difficult, seldom performed Violin Concerto; his 1971 Deutsche Grammophon recording of this work with conductor Rafael Kubelik set the standard, and is still available. Zeitlin also premiered concertos by Gunther Schuller, Carlos Surinach, and Paul Ben-Haim, besides performing and recording a wealth of other repertoire in his long career; the Toronto Star called him “one of the violin world’s grand old men, a true musical Methuselah.” Along with his solo appearances, he was a founding member of the Eastman Trio (1976-1982).

Zeitlin was named Eastman’s first Kilbourn Professor in 1976 and Distinguished Professor in 1998. In 2004, he received the University of Rochester’s Edward Curtis Peck Award for Excellence in Teaching Undergraduates. Zeitlin’s students occupy leading positions in major orchestras in the United States and throughout the world; hold important positions in universities and music schools worldwide; and are major prizewinners in international and regional competitions.