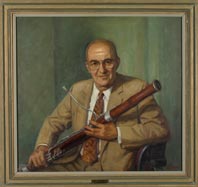 K. David Van Hoesen, professor emeritus of bassoon and former principal bassoonist of the Rochester Philharmonic Orchestra, received his bachelor’s degree from Eastman in 1950. Mr. Van Hoesen was professor of bassoon at the Oberlin Conservatory of Music (1950-54) and at the Cleveland Institute of Music (1952-54) before joining the Eastman faculty in 1954. While teaching at the Cleveland Institute, he also performed with the Cleveland Symphony Orchestra. He remained an active member of the Eastman community, Mr. Van Hoesen retired in 1991 after a 37-year career as professor at the School, and continued to play the bassoon with the Lake Placid Sinfonietta each summer from 1947 until his death in 2016.