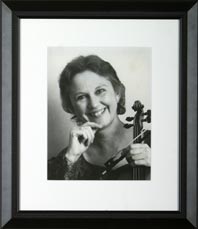 A beloved teacher and noted recitalist, Catherine Tait (1953-1997) fostered the careers of many young violinists at Eastman while maintaining an active performance schedule of her own. As a musician, Tait was highly praised for her interpretive skill, which she applied to a wide range of repertoire, performing sonatas and showpieces from the classical, romantic, and contemporary eras. “Poised, sure, confident, and sensitive, she literally made the violin breathe with her artistry,” wrote a critic from the Charleston News and Courier. Tait was well known as a performer of new works, particularly in collaboration with her husband, composer-pianist and Professor of Composition David Liptak, with whom she toured the United States extensively. In 1980, the two performed in Carnegie Hall and were featured in a program of 20th-century sonatas on National Public Radio’s Recital Hall series. Before coming to Eastman in 1986, Tait taught at Michigan State University and the University of Illinois, where she received the prestigious University Scholar Award. She served as chair of Eastman’s string department for three years, and in 1995 won the Eisenhart Award for Excellence in Teaching. She was an inspiration to her students and colleagues alike as she continued to teach and perform while battling cancer. After her untimely death at the age of 44, she was remembered not only for her extraordinary musicianship and dedication to her students, but also for her courage and perseverance while facing adversity.