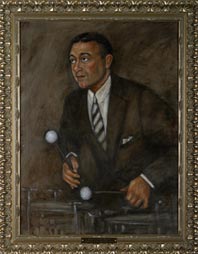 In 1967, after his retirement from the Eastman School, percussionist William Street was cited as “a remarkable example of that generation of music educators who did not go to music schools; they made them instead.”

William George Street was born in 1895 in Hamilton, Ontario, but lived in Rochester since infancy. He began his professional performing career at the age of fifteen, playing in motion picture theaters. When the Eastman Theatre opened in 1922, Street and his friend, trombonist Emory Remington (who became another legendary Eastman professor), transferred there. His drum roll was the first musical sound heard at the opening of the Eastman Theatre. Howard Hanson recruited Street for the Eastman School’s percussion faculty in 1927, and he taught here with outstanding success until his retirement in 1967.

Street was a charter member of the Rochester Philharmonic Orchestra, performing under every music director, from Albert Coates through Erich Leinsdorf, until 1956. Early in Street’s RPO affiliation, guest conductor Fritz Reiner asked him to move up from percussionist to timpanist. He took part in Howard Hanson’s Festivals of American Music from 1925 through 1958.

Street’s pupils played in major orchestras throughout the country. He was particularly pleased to have talented young women in his classes, dispelling the old notion about percussion being strictly a man’s world. In 1969, he was honored by the Rochester Alumnae chapter of Mu Phi Epsilon, the international music sorority, as Musician of the Year.