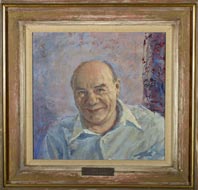 Bernard Rogers (1893-1968) was professor of composition and chair of the composition department at Eastman from 1930 to 1967. He was born in New York City, and studied architecture before turning to music. His early composition teachers were Hans van der Berg, Arthur Farwell, and Ernest Bloch. After the successful premiere of his symphonic elegy, To the Fallen, by the New York Philharmonic in 1919, Mr. Rogers was awarded a Pulitzer Traveling Scholarship for study in Europe. In 1927, he received a Guggenheim Fellowship, and studied with Nadia Boulanger in Paris and with Frank Bridge in London. He began to teach composition and orchestration at Eastman when he returned to the United States in 1929. In the ensuing 38 years, he taught more than 700 composers, many of whom went on to achieve international prominence. Mr. Rogers’ work as a composer included four symphonies, three operas, several major choral works, and numerous works of chamber music. His book The Art of Orchestration has been acknowledged as a classic in its field since its publication in 1951. He received honorary doctorates from Valparaiso University and Wayne State University, and was elected a member of the National Institute of Arts and Letters in 1947.