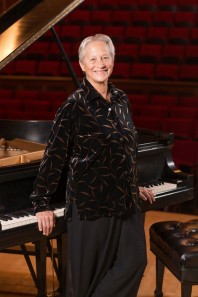 Rebecca Penneys is a popular recitalist, chamber musician, orchestral soloist, educator, and adjudicator throughout the world. Her current and former students include prizewinners in international competitions, and hold important teaching posts on every continent.

Rebecca’s teachers include Aube Tzerko, Leonard Stein, Rosina Lhévinne, Artur Rubinstein, Menahem Pressler, and Iannis Xenakis. She made her recital debut at age nine and performed as soloist with the Los Angeles Philharmonic Orchestra when she was eleven. At 17, after winning many young artist competitions in the United States, she was awarded the unprecedented Special Critics’ Prize at the Seventh International Chopin Piano Competition in Warsaw. She won the Most Outstanding Musician Prize at the Fifth Vianna Da Motta International Piano Competition (Portugal) in 1970, and was top prizewinner in the Second Paloma O’Shea International Piano Competition (Spain) in 1975. She made her New York debut in Alice Tully Hall in 1972. In 1974, she founded the acclaimed New Arts Trio, which twice won the Naumburg Award for Chamber Music (in 1980 and 1982).

Rebecca Penneys began as a resident artist at the Chautauqua Institution in 1978, when she launched the chamber music program. Rebecca celebrated her final season at Chautauqua in 2012, having devoted thirty-four consecutive summers to teaching, performing, and building the piano and chamber music areas. The New Arts Trio was Trio-in-Residence from 1978 to 2012, and Rebecca was piano chair from 1985 to 2012.

Rebecca was Professor of Piano at Eastman from 1980 until her retirement in 2017. She is also Artist-in-Residence at St. Petersburg College, Florida; President, Rebecca Penneys Friends of Piano Incorporated; and Founder and Artistic Director of the Rebecca Penneys Tuition-Free Piano Festival.