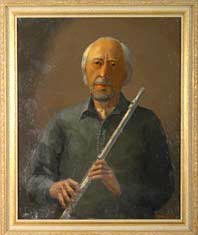 Joseph Arthur Mariano was born in Pittsburgh on March 17, 1911. His father worked for the Pittsburgh Railroad, and was once given a flute as payment for a job; the instrument intrigued young Joseph, who began lessons at age 12 with Victor Saudek. Mariano went on to the Curtis Institute in Philadelphia, where he studied with two legendary Philadelphia Orchestra musicians: flutist William Kincaid and oboist Marcel Tabuteau.

He received Curtis’ Artists Degree in 1935, and was invited by Howard Hanson to the Eastman School, where he taught from 1935 to 1974, serving as first flute of the Rochester Philharmonic from 1935 to 1968. During his tenure in Rochester, Mariano was invited by Toscanini to join the NBC Symphony, by Fritz Reiner to join the Chicago Symphony, and by Eugene Ormandy to join the Philadelphia Orchestra. But he stayed in Rochester to teach several generations of Eastman flutists, who remember him with tremendous affection and with a respect bordering on awe.

Mariano has been praised as a teacher and musician by such notable flutists as William Bennett, Jean-Pierre Rampal, Julius Baker, and Aurèle Nicolet. Mariano also won the respect of many American composers. Joseph Mariano is said to have developed “a truly American style of flute playing,” of “great strength, vitality, and sensuality.” Joseph Mariano died on February 15, 2007, in Boston, at the age of 96.