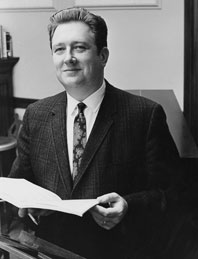 Eastman professor emeritus of voice John Maloy was born in St. Joseph, Missouri, and spent his early years in Shenandoah, Iowa, where he began singing in high school. He studied with Anna Kaskas and Sergio Nazor at Indiana University, where his first operatic roles included Wagner’s Parsifal. After continuing studies in the opera department of the University of Southern California, he attended the Hochschule fur Musik, Hamburg, as a Fulbright Scholar. From there he went on to sing leading tenor roles in German and Swiss opera houses, eventually amassing a repertoire of 30 operatic roles and 10 oratorios and making many recordings.

In 1966, John Maloy joined the Eastman faculty, where he became professor of voice, and served as chair of the voice department until 2001. He was also a soloist with the Rochester Philharmonic Orchestra and Opera Under the Stars. While at Eastman, Professor Maloy trained dozens of singers who have gone on to have important American and international careers, including Renée Fleming, Anthony Dean Griffey, Nicole Cabell, and Ian Greenlaw. In 2003, John Maloy received the Eastman School’s Eisenhart Award for Excellence in Teaching. John Maloy died in Rochester on January 12, 2012.