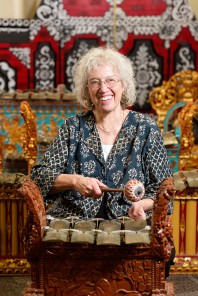 Ellen Koskoff received a bachelor’s degree from Boston University, a master’s degree from Columbia, and a PhD from the University of Pittsburgh. A highly respected scholar and author in the areas of ethnomusicology and women in music, her publications include Music in Lubavitcher Life, winner of an ASCAP-Deems Taylor Award for excellence in music scholarship in 2001.

She has been a Council Member, Secretary and then President of the Society for Ethnomusicology (SEM), and Local Arrangements Chair for the SEM National Conference (1986), and Feminist Theory and Music II Conference (1993), both held at Eastman, and also book review editor, and then general editor, for Ethnomusicology. She hosted the radio program What in the World is Music? on Rochester’s WXXI-FM .

In 1980, Ellen Koskoff joined the Eastman faculty, where she was director of the Ethnomusicology programs and director of the Balinese Gamelan Lila Muni until her retirement in 2017.