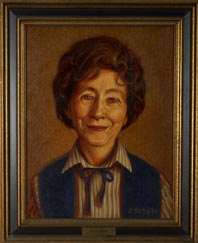 During her high school years in her native Rochester, Jessie Kneisel (1904–1992) “fell in love” with the poetry of German writer Joseph van Eichendorff and the musical settings Robert Schumann composed for it. That interest became the springboard for her lifelong vocation. Upon earning undergraduate and graduate degrees from the University of Rochester in German and history, Dr. Kneisel received a German American Exchange Stipend to study at the University of Bonn. Later, she earned a doctorate from Columbia University. She joined the Eastman faculty in 1931, teaching German, German diction, and later—after a year’s sabbatical in that European country—a course on German libretti. Two years after Howard Hanson hired her, he offered her the position of Dean of Women, a job she held until 1945. She taught at Eastman for 45 years, retiring in 1976. Dr. Kneisel’s students remember her as an enthusiastic teacher, eager to share her love for German art and culture. She and her Viennese-born husband, Karl Kneisel, helped several students financially as they continued their work either in the United States or Europe. She also was a regular concertgoer and maintained an ongoing correspondence with local music critics, especially when she felt they were giving insufficient coverage to Eastman events. In 1982, her former student George McWhorter (BM ’57) donated funds to start a competition in Dr. Kneisel’s honor. The program spotlights graduate vocalists who have featured German lieder in their recitals. The Jessie Kneisel Prize in German Lieder is given each year to outstanding vocalists and collaborative pianists.