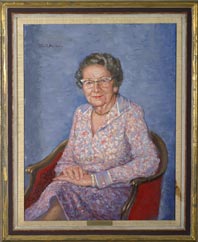 Cecile Genhart (1899-1983), professor of piano from 1926 to 1971, studied piano with Ferruccio Busoni, one of the greatest pianists and composers of her day. She made her debut as a soloist with the Berlin Philharmonic Orchestra in 1922. A review in the prestigious Journal of the American Liszt Society placed her among the country’s finest pianists. With such astonishing gifts, she might well have pursued a career as a solo performer, but she chose instead to focus on teaching. In her 54 years at Eastman, she inspired students to achieve remarkable accomplishments. One of her pupils, Barry Snyder, who became a long-time professor at Eastman, was a triple-prize winner at the 1966 Van Cliburn Competition.